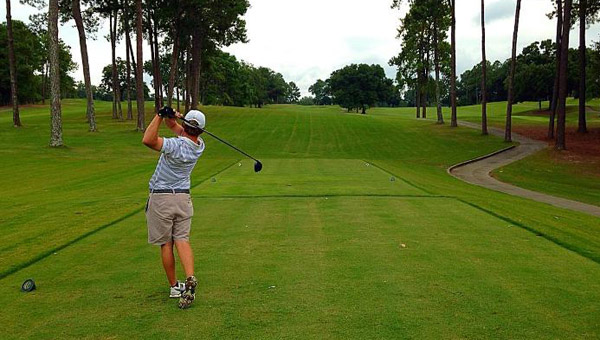 FLEMING ISLAND, Fla. – The University of Montevallo men’s golf team finished in seventh place at the Spring Kickoff Intercollegiate at the Golf Club of Fleming Island. Leading the pack for the Falcons was Dalton Skinner, who finished in a tie for third place, just one stroke behind the tournament winner.

For Skinner, it was his third top-five finish and fourth top-10 appearance in six events.

The junior from Mountain Brook, Ala. had an opening round three-over par 75 at Fleming Island. That was followed by a second round one-under par 71, which was tied for the third lowest round of the tournament. He closed things out with a two-over par 74, finishing in a tie for third place with a four-over par 220 overall.

Nick Davis finished 19th for UM with a 14-over par 230. The senior improved each round, shooting a seven-over par 79 in the first, a five-over par 77 in the second, and a two-over par 74 in the third.

Junior Juan Noce was next highest on the leaderboard for the Falcons, carding a 24-over par 240 and finishing in 32nd place. In the first round, Noce shot a five-over par 77. He followed that with an 11-over par 83 and an eight-over par 80.

Montevallo will have a few weeks off before their next event. They will take the course in Salisbury, NC on March 2-3 for the Rendleman Invitational.

The University of Montevallo had 11 athletes with top-25 individual performances at the Samford Invitational on Feb. 13-14. (Contributed) FROM... read more