COLUMBIANA – A 20-year-old Birmingham man who is facing several charges related to a vehicle theft and police pursuit from Pelham to Birmingham is set to appear in Shelby County Circuit Court on Feb. 25. 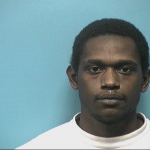 The Pelham Police Department charged Carlos DeAndre Mines, who lists an address on Wedgeworth Road in Birmingham, with felony counts of first-degree theft of property, first-degree criminal mischief and first-degree attempted assault and a misdemeanor count of attempt to elude law enforcement after the suspect was taken into custody on Jan. 14 in Jefferson County.

Mines is scheduled to appear in the Shelby County Courthouse for a preliminary hearing on Feb. 25 at 8:30 a.m.

In the Jefferson County charges, Mines allegedly stole two PlayStation video game consoles, a television and a jacket from a victim during a Dec. 17, 2014, burglary.

On Feb. 18, Mines was transported to the Jefferson County Jail for a bond revocation hearing on his two December charges.

After the Jefferson County hearing, Mines will be transported back to the Shelby County Jail, where he is being held on bonds totaling $60,500.

First-degree theft of property is a Class B felony carries a possible sentence of up to 20 years in prison. First-degree attempted assault, criminal mischief and theft of the property are Class C felonies and, if convicted, Mines could face up to 10 years for each offense.