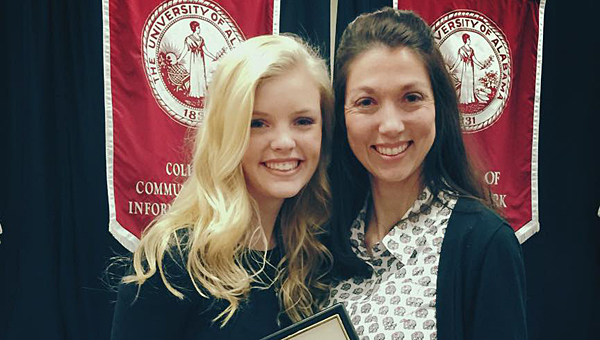 ALABASTER – Thompson High School senior Amber Harless has been laying the groundwork for her Alabama Scholastic Press Association Broadcast Journalist of the Year award since she was a sophomore.

“She started with us as a freshman, and she was on staff as a sophomore,” said THS TV and film academy teacher Brooke Dennis. “I told her then, ‘You’re on the right track to apply for Journalist of the Year.’”

For the past few years, Harless has been building her broadcast journalism portfolio at THS TV with her ongoing coverage of autism awareness, sideline sports reporting and writing for the Alabaster City School System newsletter.

On Feb. 14, Harless’ hard work paid off when the Scholastic Press Association named her the top high school broadcast journalist in the state.

“When you’re a sophomore, you don’t think this will ever come,” Harless said during a Feb. 17 phone interview. “You realize all the people you’ve met and all the things you’ve done. To me, that is the most rewarding thing about this.”

“She has had some great coverage of autism awareness. She’s really done a great job with that, especially with getting others involved,” Dennis said.

Harless is the third THS TV staff member to win the Broadcast Journalist of the Year award in the past four years, and was among a sizeable group of THS students awarded at the Scholastic Press Association conference on Feb. 14.