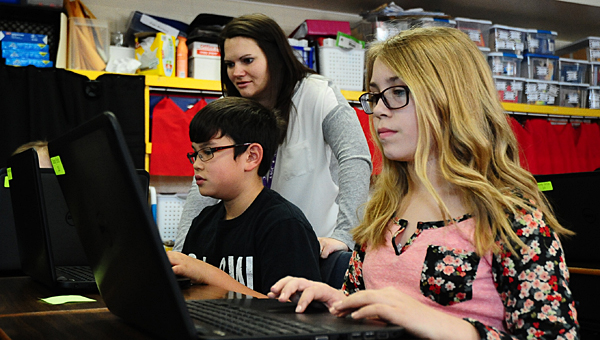 ALABASTER – Thompson Intermediate School fifth-grader Connor Robinson took a moment to gather his thoughts as he gazed at the snowflake-like shape on his computer screen on the morning of Feb. 18.

His task? To use lines of computer code to guide an ice-skating Elsa from the movie “Frozen” along the lines of the complex shape.

Less than a minute later, and after a trial run, Robinson had constructed the code and entered the appropriate values to successfully complete the exercise.

“It’s pretty easy,” Robinson said as he continued to the next, even-more-complex shape.

Realizing the next exercise was a culmination of the shapes he had already navigated, the fifth-grader put his skills to the test.

“This one is the same thing, I just need to change it a little bit,” Robinson said to himself as he built a new set of codes.

From Feb. 18-20, TIS gave every student at the school a chance to hone their computer programming skills through exercises on the Code.org website. School principal Brent Byars decided to hold the schoolwide initiative this year after the TIS gifted education department saw success with the program last year.

“There is a big push to do coding in the classroom nationwide,” said TIS gifted education teacher Rita Sparks. “In 10 years, we will have 1.4 million jobs in computer science, but only 400,000 people to fill those jobs.”

After watching an introductory video featuring several celebrities, the students used the website to construct progressively more complex lines of code. The program presented a shape and tasked the students with guiding Elsa pixel-by-pixel through the shape.

The site gave the kids a graphical database of code lines, but the students had to choose which order to layer the lines, and the numerical values to assign to each line.

“They brag when they get farther (in the program) than I got,” Grice said with a laugh.