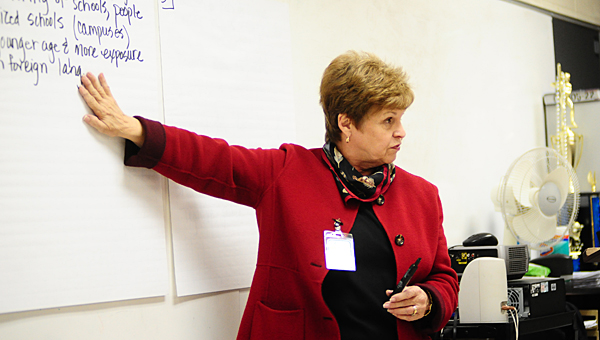 ALABASTER – Parents, teachers and community members named goals such as smaller class sizes, more access to technology and educating students for today’s job markets while outlining their vision for the Alabaster City School System during a Feb. 19 forum.

About 100 people attended the community forum, which was hosted at Thompson High School by Marcia Burke Enterprises as part of the ACS strategic planning process. After a brief overview of the process, attendees split into three groups to share their goals for the school system’s future.

During the small group sessions, attendees said they would like to see more internship and mentorship opportunities at the schools, fully funded classrooms, greater access to technology and pedestrian-friendly school and athletic campuses.

Many participants praised the school system’s existing academy programs, but said they would like to see more emphasis put on training students for non-college career paths.

Community members also said they would like to see fewer different schools in the city, accommodations for all learning styles and higher pay for teachers.

When asked to share items they would not like to lose in the system’s future, participants praised teacher bonuses, extracurricular offerings, special-needs programs, online registration, school safety and monetary incentives for passing Advanced Placement scores.

During the small groups, representatives from Marcia Burke Enterprises wrote down the participants’ feedback. The company will now type up the responses and use them while developing the school system’s five-year strategic plan.

Burke said her company is planning to finalize a draft of the strategic plan and provide it to the school system in May.

“You will tell us ‘Where are you now and where do you want to be in five years,’” Burke told forum attendees. “(Alabaster School Superintendent) Dr. (Wayne) Vickers and the BOE will decide how you get there.”

Vickers praised those in attendance for sharing their opinions.

“We have a lot to be proud of, but we feel this is the next step in the process to build a top-notch school system,” Vickers said. “We have a quality school system already. This will help us be even better.”

The school system also will accept community feedback through an online survey which will be posted on Alabasterschools.org from Feb. 20 through March 13.

Forest Oaks Elementary School Gifted Education students placed among the top 10 out of nearly 350 teams in the Stock... read more