ALABASTER – A 33-year-old Birmingham woman is facing up to 20 years in prison after she allegedly stole several thousand dollars worth of merchandise from the Alabaster Walmart store. 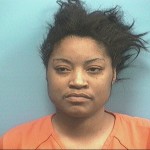 The Alabaster Police Department arrested Kenyata Lashun Brown, who lists an address on Avenue S in Birmingham’s Ensley community, on Feb. 12 and charged her with one felony count of first-degree theft of property.

Brown’s charge came after she allegedly stole hundreds of dollars worth of Zegerid and Prilosec over-the-counter medications, “several packs of Nicorette gum and several razors and/or cartridges” from the Alabaster Walmart store on Jan. 13, according to her arrest warrant filed in Shelby County Circuit Court.

According to the warrant, the stolen items’ total value was $5,486.06. According to Alabama law, a first-degree theft of property charge comes when stolen property totals more than $2,500.

As of Feb. 19, Brown was being held in the Shelby County Jail on bonds totaling $30,000. The jail had not yet released the suspect’s mugshot.

Brown was scheduled to appear in Shelby County Circuit Court on Feb. 19 for a preliminary hearing.

First-degree theft of property is a Class B felony, according to Alabama law. If convicted, Brown could face up to 20 years in prison.

Helena, Pelham and Alabama Bureau of Investigation agents examine the suspect’s vehicle after a shooting in the parking lot of... read more