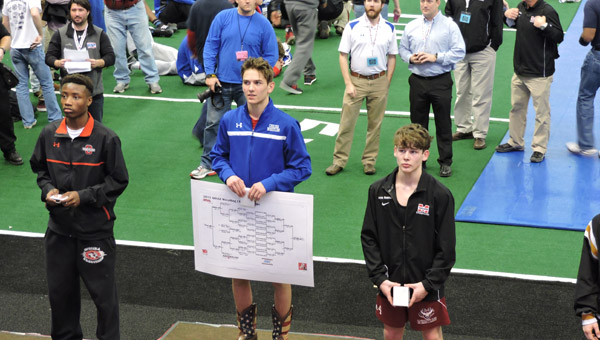 Aaron Ledbetter, center, stands atop the 6A 120-pound weight class at the state tournament in Huntsville on Feb. 14. (Contributed)

The journey that led to Aaron Ledbetter winning the 120-pound 6A wrestling state championship was not easy. Ledbetter, who began wrestling in the fourth grade with the Alabaster Youth Wrestling Association, seriously considered quitting the sport before high school because of turmoil with the head coach. It was only when the school hired a new wrestling coach when he was moving into the ninth grade that Ledbetter decided to stay with the sport.

Ledbetter, now a junior, was a member of the inaugural Chelsea wrestling team, which formed when he was in the seventh grade, and since its inception the program has been marked by a high degree of turnover at the head coach position.

Despite the constant change at the helm of the Chelsea program during Ledbetter’s tenure, he believes the program has finally found a long-term solution in Ben East, who took the position at the start of this past season. East credits Ledbetter with being one of the top wrestlers in the program both from a technical standpoint on the mat and from a leadership standpoint off it.

“He’s a good leader not only on the wrestling mat but as far as attitude goes as well,” East said. “He can make sure everyone is having a good time. That shows when he’s on the mat.”

Ledbetter, who stands at 5 feet, 8 inches tall, wrestled in the 126-pound class for the first half of the season before dropping to the 120-pound class, which is what East believes marked the start of his championship aspirations.

“Dropping to 120 (weight class) I knew would help him out,” East said. “I said, ‘We’ve got a real shot at this (state championship)’ around mid-January. He was wrestling a kid from Homewood who was one of the top wrestlers in the state and beat him.”

Going into the state meet, East hypothesized Ledbetter was a “dark horse” to win state in his weight class, but there was still a heavy amount of suspense throughout the tournament, which was all released when he was able to defeat Brennan Shankles of Muscle Shoals in the championship round.

“We were very excited,” East said. “All the tension we had all day was let loose in that moment.”

“It might have been the best feeling in my life,” said Ledbetter, in reference to the win. “All the hard work, all the summer practices paid off.”

Moving into his senior year, Ledbetter would love to repeat as a state champion, and has his sights set on an undefeated campaign.

“The goal is to be undefeated,” he said. “I guess we’ll see what happens.”