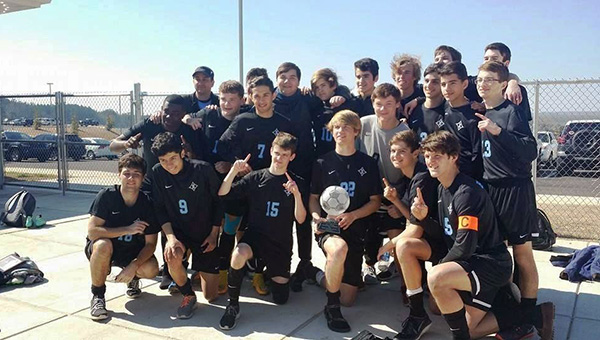 HELENA–Helena High School has had tremendous success over the past several months in athletics, and now that success is carrying over to the spring sports in its first year as a high school.

Helena defeated Guntersville 3-0, Hope Christian 12-2 and Arab 7-1 respectively. The tournament was based on total points and the Huskies competed in the Bronze division, where they finished with 28 total points, 12 points ahead of second place Arab.

Helena boys’ soccer coach Zach Morgan said his team has a good foundation to build on, and said he was proud of the way his team came out and played in the tournament.

“I have mostly juniors and two seniors and a handful of sophomores on varsity,” said Morgan. “We are lucky compared to other schools because in just starting a program we already have a good foundation from players coming over from Pelham.”

Morgan’s last coaching position was in 2013 where he was the JV head coach and assistant varsity coach for Oak Mountain High School while still in graduate school.

Helena senior Matt Sheets was named MVP of the tournament. Sheets scored 4 goals in a five-minute span in the Arab game.

Morgan wants his team to have a fast style of play, and they demonstrated that in the tournament.

“I want us to have a quick style of play, and I’m just trying to get our team to start games fast and try to get up to game speed faster,” said Morgan.

Helena will play its first area game at home against Jemison on Tuesday, Feb. 24, at 5:30 p.m.