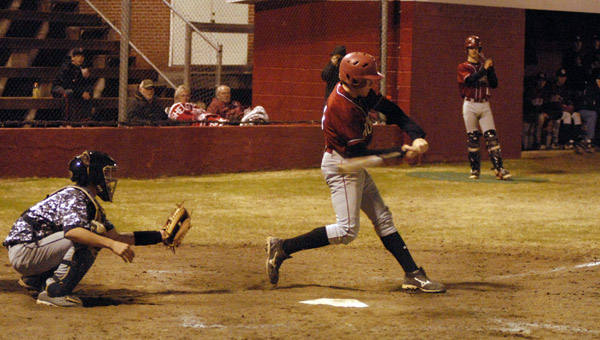 Shelby County was able to sqeeze past Holtville in the opening game of the year by a final of 5-4 .The contest went eight innings. (File)

CHELSEA –The Shelby County Wildcats started their season off on the right foot on Tuesday, Feb. 17 with an extra-inning victory over Holtville High School at Chelsea High School in the Hope for Gabe tournament.

Spencer Dill started on the mound for Shelby County in the opener, and pitched three scoreless innings before the Bulldogs squeaked out two unearned runs in the fourth inning to take the lead. Holtville added another unearned run in the top of the fifth to take a 3-0 lead, which they held going into the sixth inning. Dill pitched 5 complete innings with no earned runs given up on the outing before Cody Jones took the mound in the top of the sixth for the Wildcats.

Shelby County scored one run in the sixth and ripped off three runs in the bottom of the seventh to force extra innings, with the score all square at 4-4. After holding the Bulldogs scoreless in the top of the eighth, Tanner Carter walked to start the bottom of the eighth inning for the Wildcats. Zac Scott came up to the plate with Carter on first, and Carter was able to advance to second on a mishandled ball by the catcher. With Carter on second, Scott ripped a single to left field that allowed Carter to score, and Shelby County came away victorious 5-4 in comeback, walk-off fashion to win the first game of the year.

Kyle Cofer finished 3-4 on the night with a stolen base and Adam Iandefeld was 2-4 to lead Shelby County from the plate.

Aaron Ledbetter, center, stands atop the 6A 120-pound weight class at the state tournament in Huntsville on Feb. 14. (Contributed)... read more