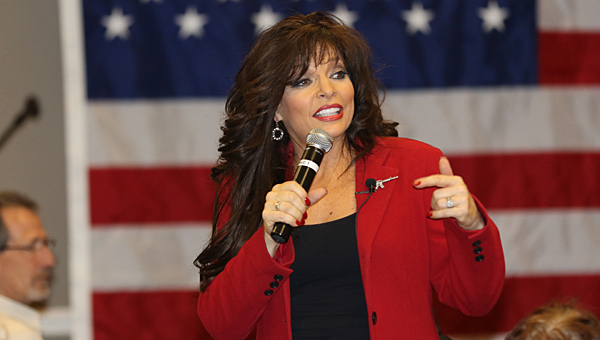 Jan Morgan, founder of Armed American Woman and owner of The Gun Cave in Hot Springs, Ark., speaks during Bama Carry’s kickoff event at the Pelham Civic Complex on Feb. 21. (Special to the Reporter/Eric Starling)

PELHAM – Since incorporating as an Alabama non-profit entity in November, the leadership of Bama Carry has made it their mission to educate folks on the Second Amendment and make sure that they exercise their constitutional rights to protect themselves. According to Eddie Fulmer, President and Co-founder, the group has 10,000 followers statewide and more than 1,000 vested members.

“Our goal is to educate, and what better way than an event like this that draws folks from all over the state,” said Fulmer. “Our main chapter is based in Northport, Alabama, but we have 18 satellite groups across the state and many are represented here today.”

Members gathered at the Pelham Civic Complex for the group’s first major event, the 2015 Alabama Firearms Freedom and Legislative Kickoff. The all-day event kicked off with state Sen. Gerald Allen, R-Tuscaloosa, discussing the bill that he has introduced for the March 3 legislative session. The proposed bill, SB14, would extend a person’s right to carry a loaded gun in their vehicle without a permit.

Several members were there specifically to hear Jan Morgan. As a nationally recognized Second Amendment advocate, NRA certified firearms instructor and range safety officer, founder of Armed American Woman and owner of The Gun Cave in Hot Springs, Ark., Morgan has become the voice of the Conservative voter.

According to Morgan, while the message may change from one event to the other, the main points are always the same.

“People need to get fired up. You must vet those running for office and then hold them accountable once they are elected,” Morgan said. “More importantly, we must educate our youth and teach them the constitution, so they also will hold their leaders accountable.”

With the success of this event, Fulmer said there will be more events in the future with key legislators and speakers. For more information, visit Bamacarry.org.

The Chelsea Lady Hornets won the Gold Division of the Lakeshore Shootout with a 3-0-1 record on the tournament. (Contributed... read more