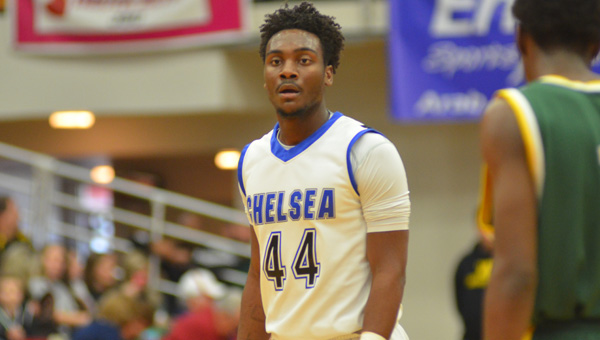 The Chelsea Hornets boys basketball team’s cumulative record for the 2014-15 season, to the casual passer-by, might not seem overly impressive. However the 16-16 mark achieved by head coach Nicholas Baumbaugh’s team included the first 6A, Area 10 win since 1986 and an impressive 6A Sweet Sixteen berth. One of the main reasons for Chelsea’s postseason success was due to senior Darrell Foster, who finished his time at Chelsea with one of the most impressive on-court resumes in the program’s history.

Foster finished his playing days at Chelsea with 1,072 points and 816 rebounds. Coach Baumbaugh and the Chelsea administration only have statistics available dating back to the 2003-04 season, but during that time period, Foster is the third all-time leading scorer and the all-time leader in career rebounds.

Foster was given an immense amount of responsibility all year to score tough inside buckets and clean up the offensive and defensive glass on a Chelsea team that was usually undersized. He fought through an early season ankle injury and at times, gamely fought through noticeable pain to give his team a boost.

In his three years on the varsity team, he averaged 12.5 points and 9.5 rebounds per game, all but assuring a double-double every time he stepped on the floor.

The Shelby County Wildcats beat Jemison at home on Feb. 20 by a final of 6-1. (Contributed) By BAKER ELLIS... read more