COLUMBIANA–A 20-year-old Columbiana man has plead guilty to a felony charge of possession of obscene matter depicting a person under the age of 17 and will spend the next two years in prison. 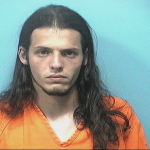 The Shelby County Sheriff’s Office arrested Delvin Blayze Burnett, who lists an address on Chelsea Road in Columbiana, on July 11, 2014, and charged him with child pornography possession.

According to his arrest warrants, Burnett knowingly possessed obscene matter containing a visual depiction of a person under the age of 17 years engaged in any act of sado-masochistic abuse, sexual intercourse, genital nudity or other sexual conduct between January and June of 2014.

Burnett pleaded guilty to the Class B felony of possession of obscene matter on Feb. 2 in the Circuit Court of Shelby County.

The state recommended a sentence of 10 years to be split with two years to serve in prison and the remainder of the sentence is suspended for five years on supervised probation.

Burnett must also report to Alabama Abuse Counseling immediately upon his release as well as successfully complete a Sex Offender Intervention Program according his guilty plea documents. He must avoid contact with the victim and the victim’s family.

The Oak Mountain girls soccer program, fresh off a 6A state championship, won the Platinum Division of the Lakeshore Shootout... read more