No injuries in Pelham 18-wheeler wreck 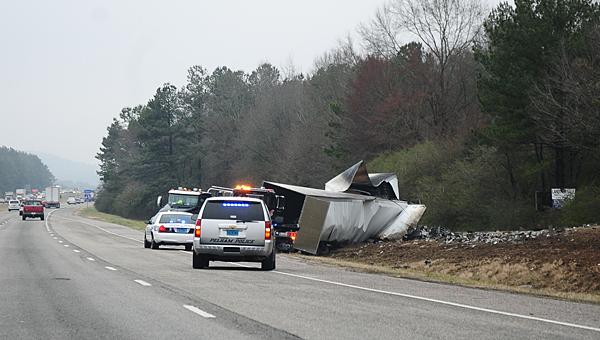 Pelham police and wrecker crews work to clear an 18-wheeler wreck on Interstate 65 near mile marker 242 at about 8:30 a.m. on Feb. 23. (Reporter Photo/Neal Wagner)

PELHAM – No injuries were reported after an 18-wheeler ran off of Interstate 65 in Pelham on Feb. 23 just south of the tank farm exit near mile marker 242.

The wreck happened at about 6:20 a.m. when the truck’s driver experienced medical complications and ran off the outside of the southbound lanes of I-65, according to Pelham Police Department Lt. Davy Lott.

The truck, which was carrying casting pieces for water pumps, struck an earthen bank on the side of the road, causing extensive damage to the truck’s trailer.

At about 8:30 a.m., debris from the incident was strewn about 30 yards from the vehicle’s resting point, and crews were still on the scene working to clear the wreck.

Lott said the driver was the only passenger in the truck, and no other vehicles were involved. The truck driver did not sustain serious injuries in the wreck, but was transported to Shelby Baptist Medical Center to be treated for the medical complications leading to the crash.

Police were not forced to close any travel lanes of I-65 as a result of the incident, but Lott said onlooker delays caused heavy traffic on the north- and southbound lanes of the interstate for much of the morning.