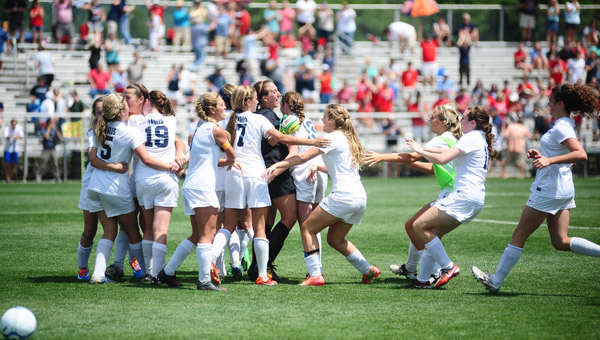 The Oak Mountain girls soccer program, fresh off a 6A state championship, won the Platinum Division of the Lakeshore Shootout on Feb. 20-21. (File)

Over the weekend from Feb.20-21, a number of local girls teams competed in the Lakeshore Shootout in Birmingham, which took place across a number of locations including Sports Blast Shelby County, Pelham High School and Helena High School. The tournament was split up into four divisions, three of which had six teams competing and one of which had four. The Oak Mountain Lady Eagles were able to win the Platinum Division of competition with a number of close games.

On the weekend, Oak Mountain defeated Grissom by a final of 1-0 with a goal from Allison Nix. The Lady Eagles tied Vestavia Hills 0-0 and were able to nudge past Spain Park for a 1-0 victory, with the goal coming from Alexandra Dunn via a Hailey Whitaker assist.

Oak Mountain goalkeeper Katie Denney was responsible for two shutouts during the tournament, and made the all-tournament team along with defender Neal Martin. Sophomore defender Lucy Thrasher was named the tournament MVP after an impressive weekend.

The Lady Eagles will look to build on the momentum gained from the Lakeshore Tournament as they turn their attention to an out-of-state opponent in Greater Atlanta Christian of Norcross, Ga. Oak Mountain will take on the Atlanta-based program on Feb. 27 at the Wire Grass Soccer Complex.