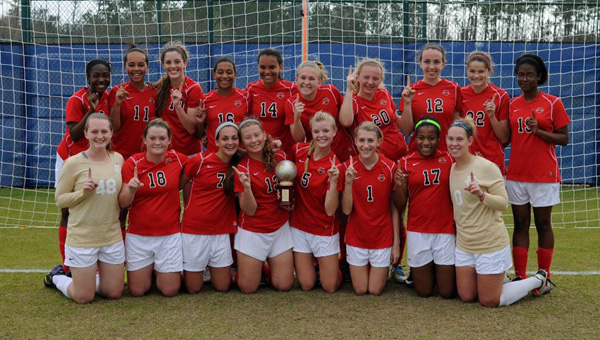 Both the Thompson boys’ and girls’ soccer programs won the Gulf Shores Island Cup on Feb. 20-21. The girls’ team won their games by a combined score of 17-0. (Contributed)

GULF SHORES- Both the Thompson boys’ and girls’ varsity soccer programs travelled to Gulf Shores on Feb. 20-21 to participate in the Island Cup Championships. The tournament, which was sponsored by the Gulf Shores High School boys soccer team, saw more than 30 teams compete, and both Warrior squads walked away from the tournament with first place hardware.

On the first morning of competition, Thompson’s boys’ team defeated Foley by a final score of 3-1 to start the tournament off on the right foot for the Warriors. The Lady Warriors also played Foley in their opening game on Friday afternoon, and thumped the Lady Lions by a final of 10-0.

With one victory apiece under their belt, both teams went on to win their afternoon games to secure spots in the Saturday semi-finals. The boys’ team squeaked by their Friday afternoon contest over Benjamin Russell by a final score of 3-2, while the Lady Warriors continued their dominant tournament performance with a 4-0 win over St. John Paul II. Through the first day of the tournament, the Lady Warriors had outscored their opponents by a combined 14 goals to zero.

On Saturday, Feb. 21, the Lady Warriors took the field first in a game against Huntsville, where Troy commits Brittany Yoder and Amber Harless both scored for Thompson to lead the Lady Warriors to a 2-0 victory. The boys team followed suite later in the day against a St. Paul’s team with a 2-0 victory of their own. Dimitri Davis and Kenny Rodriguez were responsible for the Warrior goals in the semi-final round.

The Lady Warriors finished up their impressive tournament run with a 1-0 victory over Hewitt-Trussville in the finals later in the evening to bring their record to 4-0 on the tournament. The combined scores from all of the Lady Warriors games were 17-0. In the last game of the tournament, the Thompson boys finished their equally impressive tournament run with a 2-1 victory over Fairhope to give both the boys’ and girls’ teams a first-place finish.