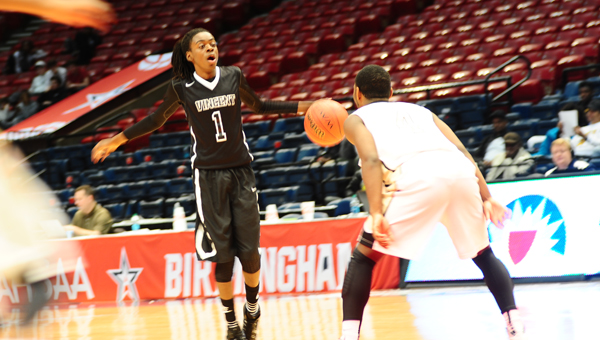 Najar Williams of Vincent tries to make a move to get into the lane against Elba on Feb. 23. Vincent fell in the 2A Final Four contest, 48-45. (Reporter Photo / Baker Ellis)

BIRMINGHAM – The 2A Final Four matchup at the Birmingham Jefferson Convention Complex pitted two teams against each other who are not strangers to the big stage. The Elba Tigers are the defending 2A State Champions, while the Yellow Jackets of Vincent have been knocking at the door of a championship for the entirety of head coach John Hadder’s reign. This was Vincent’s third time in the 2A Final Four under Hadder, however they once again fell short of the ultimate goal, as a late comeback attempt fell short and the Yellow Jackets’ season ended one game earlier than they hoped by a final of 48-45.

Elba played a very slow, methodical game for the entire first half. The Tigers would work the ball around the perimeter time and again, picking their spots before they chose to drive and get fouled or finish at the rack.

Hadder said his team knew what Elba wanted to do, but credited the Tigers offense with finishing an unordinary amount of tough buckets in the first half that put a large gap on the scoreboard between the two schools in the first half.

Vincent only managed five first quarter points off of an inside bucket via Wesley King and a late three-pointer from Jacorey Roper. Elba used their paralyzingly slow half court offense to lull Vincent to sleep before getting to the rim, and used their efficient style of play to build a 16-5 lead after one quarter. The tide didn’t change much in the second quarter for Vincent either, and at half the scoreboard read 26-13 in favor of Elba.

The Yellow Jackets responded to Hadder’s wishes, and matched their point total from the first half in the third quarter alone to cut into the Elba lead, and went into the fourth trailing 34-26.

Vincent was able to stay in the game late because Elba went 3-10 from the charity stripe down the stretch, but that would turn out to be enough as, trailing 48-45 with seconds to play, Roper’s desperation three drew iron, but did not find the bottom of the net.

Roper led the way for Vincent with 14 points and seven boards. The Yellow Jackets finished the season with a 23-10 record.