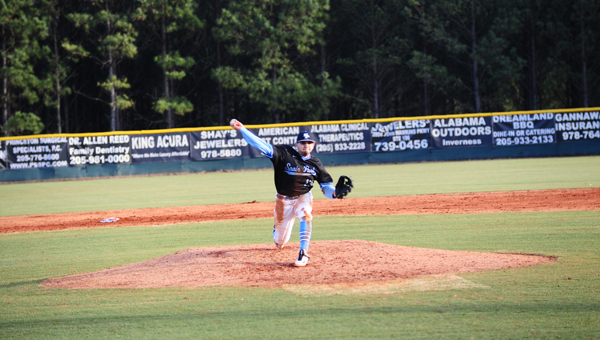 Drew Hawker of Spain Park throws a pitch in a Feb. 24 matchup with Briarwood. Briarwood pulled away from the Jaguars early and won 7-1. (Reporter Photo / Baker Ellis)

HOOVER – A first inning Pierce Merry home run set the tone for Briarwood in a Feb. 24 matchup with Spain Park that saw the Lions reach base early and often on their way to a 7-1 victory. Drew Hawker took the mound for Spain Park, and pitched gamely for the Jaguars through four innings, but Briarwood would not be denied at the plate on this afternoon, coming through with a number of clutch hits to take and extend the lead.

After Merry’s first inning shot fell on the other side of the left field fence to give Briarwood an early 1-0 lead, the Lions would do the most damage in subsequent inning. In the second, Harrison Cain doubled and Cole Steadman reached base on balls with two innings out Cain was able to get home after Hawker through one past his catcher. With Eddy and Cain on base and two outs, Jake Morris drove them both home to give the Lions a 4-0 lead after two.

Carson Cupo was on the mound for Briarwood and pitched a complete game. Spain Park’s lone run came in the sixth inning when Bryan Sanderson was able to cross the plate. With the score at 5-1 in the seventh inning, and the Jaguars trying to mount a comeback, Briarwood was able to take the wind out of the sails of the home team with a two-run inning. With two outs in the top of the inning and two men on base, Luis Fuentes ripped a ball down the first base line that drove both base runners home and saw Fuentes end up on third base for a clutch late game triple.

Spain Park could not mount a comeback in their half of the seventh, and Cupo finished the game with a strikeout to give the Lions the win.

Briarwood is scheduled to play Oak Mountain tomorrow at Oak Mountain, and Spain Park’s next contest is on Friday, Feb. 27 when Wetumpka will come to visit the Jaguars.