Noah Galloway headed to ‘Dancing with the Stars’ 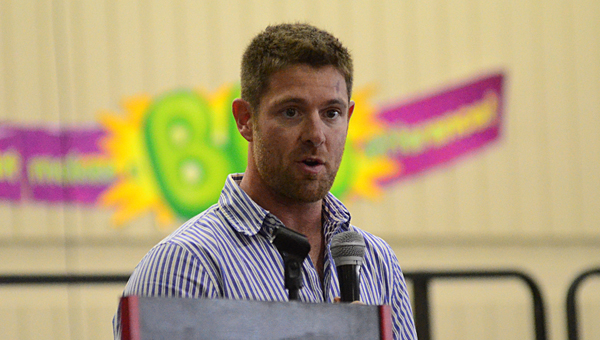 U.S. Army Sgt. Noah Galloway, an Alabaster resident and recent winner of the Men’s Health Magazine Ultimate Guy contest, will compete in season 20 of Dancing with the Stars. (File)

ALABASTER – An Alabaster celebrity who previously appeared on the cover of Men’s Health magazine will have a chance to be in the national spotlight again after he was chosen to compete in the upcoming season of “Dancing with the Stars.”

ABC’s Good Morning America on Feb. 24 announced the lineup for the show’s upcoming 20th season, which will mark the program’s 10th anniversary on the major television network.

During the show, celebrities from across the nation receive dance lessons from professional instructors, and then compete each week in front of a judging panel. Each week throughout the season, the dancer with the lowest score – which is calculated by the judges and by viewer votes – is eliminated from the competition.

Among the participants in the upcoming season will be Noah Galloway, an Alabaster resident and well-known former U.S. Army sergeant. He will compete alongside stars such as Suzanne Somers, Patti LaBelle and Michael Sam.

Galloway has gained national acclaim over the past year after he won Men’s Health Magazine’s “Ultimate Guy” contest, beating out 1,300 other contestants to be featured on the front of the magazine in early October.

After working to regain his fitness, Galloway decided to enter the Men’s Health contest, and was featured on the magazine’s cover after winning.

“One star name fans may not know yet is U.S. Army veteran Noah Galloway,” read the post. “The Iraq War veteran lost his left arm above the elbow and left leg above the knee in an IED attack and will bring his inspirational story of overcoming all the odds to the ballroom.”