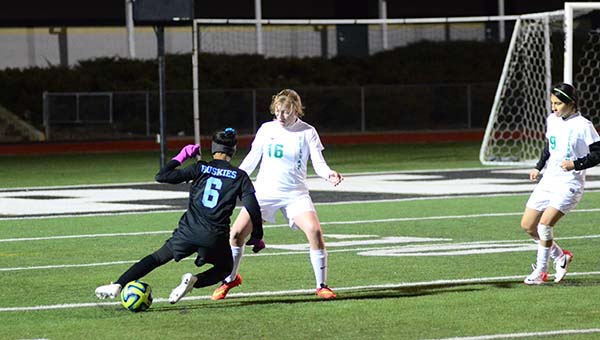 Amber Carter (6) of Helena tries to get around a Pelham defender. Pelham defeated Helena 2-0 on Feb. 24. (Reporter Photo/Graham Brooks)

PELHAM–The Pelham Panthers took on the Helena Huskies for the first time ever in a girl’s soccer match at Pelham High School and in a hard-fought match the Panthers came away with a 2-0 win.

Pelham wasted no time getting on the scoreboard first, as Monica Melendez broke free and put a ball in the back of the net in the first minute of the game. Maira Martinez had the assist on the goal.

The second goal of the game came with 10:42 remaining in the first half as freshman Chanel Hernandez scored off an assist from Emilee Blue giving the Panthers a 2-0 lead that they never gave up.

Both Melendez and Hernandez scored their first goals of the season and Pelham head coach Brittany Pollard discussed the importance of them stepping up in the game.

In a game that was physical throughout, Helena had a few shots on goal but were never able to get past Pelham goalkeeper Lupito Brito, who recorded four saves on the night and earned the shut out.

This time last year Pelham had seven of Helena’s current players on their team before Helena High School formed their own school and Pollard said it was different seeing them on the other sideline and it did make it more of a challenge.

“We walked away with the victory over Helena and probably the first of many games that we’ll play with them,” said Pollard. “It’s nice to come out to this rivalry, or that’s what I’ll call it in the future, and come out with that win tonight and the girls gave it everything for 80 minutes.”