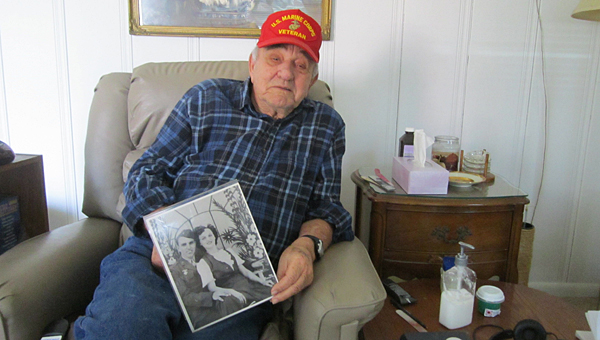 Alabaster resident William Taylor displays a photograph of himself and his late wife, Ida, at his house on Feb. 25. (Special to the Reporter/Ginny McCarley)

ALABASTER—William Taylor recalled Christmas Day 1945 — the day he got home from serving in the Marine Corps. during World War II — as being one of the best days of his life.

Taylor joined the Marine Corps on Oct. 14, 1942, at the state fair and was sworn in at the Alabama Theater in downtown Birmingham.

“I was going to be drafted, so I volunteered,” Taylor recalled.

One year later, he headed oversees where he served on the Pacific Ocean theater, helping take the Marshall Islands, Mariana Islands and fighting in the Battle of Iwo Jima.

Their next destination was going to be Tokyo, Japan, but the war ended before that move was necessary.

Taylor returned home to his wife, Ida “Jack” Elizabeth Blewster, who wrote to him every day during the two years he served oversees.

“She wrote to me everyday while I was in the Marine Corps. If I failed to get a letter one day, I’d get two or three the next day,” Taylor recalled.

The two were married on Nov. 10, 1945 at the Columbiana courthouse during a brief leave of absence.

Together, they built a life and a home in Alabaster. Taylor built the house where he still lives today using lumber from World War II soldier barracks torn down in Anniston.

“You couldn’t get much lumber back then,” Taylor explained, so he gathered the yellow pine oak paneling from the barracks.

Once, when Taylor was taking a nap on the couch, a truck with a Ditch Witch on the back rolled right through the wall of their house and into their living room, after the driver left the vehicle unattended. It hit the couch where Taylor was sleeping and pushed it into the corner.

“(My wife and I) got out to the yard and the yard was full of people,” Taylor aid, noting that the only injury he sustained was “one little scratch on his elbow,” though his daughter, Ann Taylor, said later neck problem could possibly be linked to the accident.

“He said he wasn’t going to be over here taking a nap anymore,” Ann Taylor said with a laugh.

Taylor recalled many happy memories of his eventful life in Alabaster, where he raised his two children with his wife, who is now deceased.

Art and talent on display at Shoal Creek

The talented father-daughter duo, George Thompson and Caroline Thompson Little, stand in front of their pieces displayed at the Shoal... read more