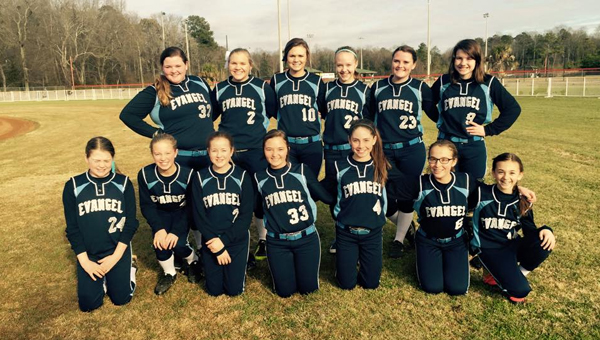 The Evangel Christian Lady Lightning won their first contest of the year on Feb. 24 by a score of 14-8. (Contributed)

ALABASTER – In a high scoring affair on Feb. 24, the Evangel Christian Lady Lightning won their first softball game of the year against the North River Christian Lady Chargers by a score of 14-8.

North River struck first in the top of the first inning with a four-run effort that put the Lady Lightning in a bind early. Evangel Christian chipped away at the lead over the course of the next two innings to tie the game at four runs apiece. Heading into the fourth inning the score was still tied at 4-4 before the Lady Chargers hung three more runs on Evangel, and when Evangel Christian responded with one run of their own in their half of the fourth, North River led 7-5.

After a scoreless fifth inning and another run from North River in the top half of the sixth, Evangel Christian was down three runs with little time to make up the difference. That lead would quickly diminish and turn itself around however, as the Lady Lightning torched North River in the bottom half of the sixth for nine runs on their way to building a 14-8 lead. The top half of the seventh saw no runs scored, and Evangel Christian walked away from their first game of the year the winners of a solid comeback performance.

Freshman Anna Vaughn led the way for Evangel Christian at the plate, going 3-3 with one run scored, a triple and three RBIs. Seventh grader Maddie Williams also had an excellent day for the Lady Lightning, connecting on both of her at bats, one of which was good for a single, and also driving in three crucial runs. Junior Emily Murray led the way in runs scored with four, and went 2-4 from the plate on the afternoon.

The Lady Lightning had a big day from the plate, with a cumulative batting average of .379 on the day. They moved to 1-0 on the season with the win.

Steven Knudson of the University of Montevallo was named the Peach Belt Conference Player of the Week after hitting four... read more