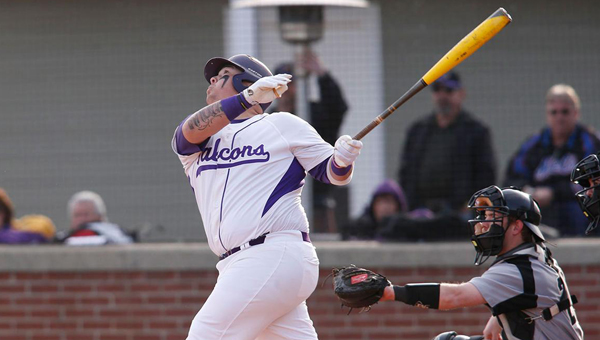 Steven Knudson of the University of Montevallo was named the Peach Belt Conference Player of the Week after hitting four home runs in a series with nationally ranked UNC-Pembroke. (Contributed)

AUGUSTA, Ga. – University of Montevallo junior Steven Knudson was named the Peach Belt Conference Player of the Week after blasting four home runs in a conference series against nationally-ranked UNC Pembroke last weekend, including a program record-tying three homers in a single game against the Braves.

Knudson homered three times in the Falcons’ 7-6 loss in 11 innings in the series opener Feb. 21 against the Braves, who entered the series ranked No. 3 in the National Collegiate Baseball Writers Association (NCBWA) NCAA Division II poll. Knudson finished 3-for-5 at the plate while driving in five of the Falcons’ six runs in the game.

Knudson is currently third in the Peach Belt Conference in home runs and slugging percentage.

Knudson and the Falcons will return to action this weekend with a Peach Belt Conference series against GRU Augusta at Kermit A. Johnson Field.

First pitch in the series opener is set for Saturday, Feb. 28 at 1 p.m.