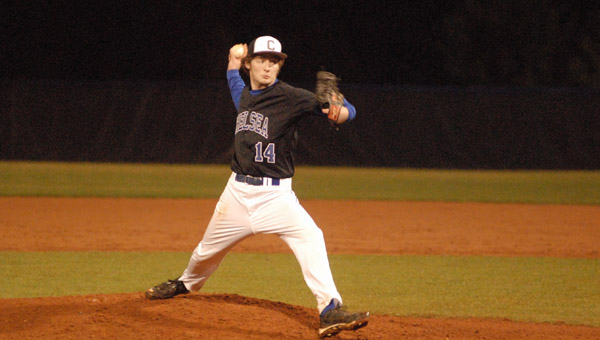 Chelsea split a pair of games with Pleasant Grove on Feb. 24. They lost the opening game 2-1 but bounced back to win the next 11-9. (File)

PLEASANT GROVE – In a doubleheader matchup between the Spartans of Pleasant Grove and the Chelsea Hornets, the visiting Hornets split the series. After dropping the opening game 2-1 in heartbreaking fashion, Chelsea responded in the second game with a strong offensive effort where they hung 11 runs on the scoreboard and went home with a 1-1 split on the day.

The first matchup was a true pitchers’ duel. Both Jake Harkins of Chelsea and Matt White of Pleasant Grove pitched complete games for their respective sides, and the two were virtually even in every statistical category. White threw eight strikeouts to Harkins’ seven. Harkins gave up four hits to White’s five. Pleasant Grove was able to hop on the scoreboard first after Jordan Smith drove a triple deep into the outfield and was subsequently brought home on a single. Chelsea responded in kind in the top of the second inning with a run of their own, and the score was tied after the second.

The stalemate in the first game was broken in the bottom of the sixth when Jacob Bislarat stole third base and subsequently scored on the play after a throwing error, and the game ended with the Hornets on the wrong side of the scoreboard 2-1.

Looking to get even in the second outing, the Hornets absolutely teed off on Pleasant Grove in the top of the first inning of the next game, scoring nine runs in the top of the first. A number of Hornets put the ball in play in the inning, but Tyler Blackburn provided the highlight of the moment when his rope of a triple drove home two runs to make the score 6-0 midway through the inning.

Pleasant Grove would respond with three runs in the second and four runs in the fifth, but could never fully close the gap, and Chelsea redeemed the earlier loss with an 11-9 win. Tanner Masters pitched 4.1 innings for the Hornets, and Joel Cheatwood closed out the remaining 2.2 innings to give Chelsea the win and the 1-1 draw on the day.

Senior-heavy Pelham looking for success on the baseball diamond

Sam Finnerty and the Pelham Panthers are poised for a stellar 2015 season. (Contributed) By BAKER ELLIS / Sports Reporter... read more