How do Pelham residents, business owners feel about smoking ban? 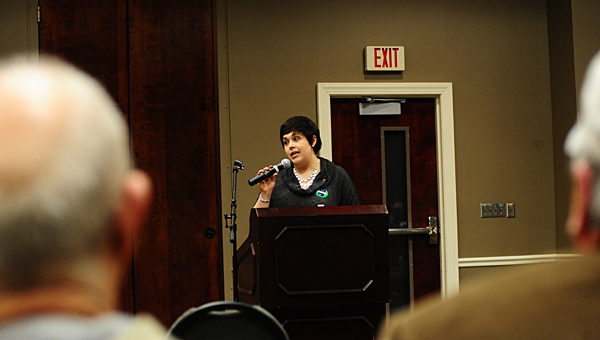 Ashley Lyerly with the American Lung Association voices support for a Pelham smoking ban during a Feb. 26 hearing as business owners against the smoking ban look on. (Reporter Photo/Neal Wagner)

PELHAM – Pelham residents and business owners shared conflicting thoughts on the city’s proposed smoking ban during a Feb. 26 public hearing on the matter, as most speakers voiced opposition to the proposed ordinance.

During the public hearing at the Pelham Civic Complex and Ice Arena, eight speakers said they would not be in favor of a citywide smoking ban and five voiced support for the issue.

Most of the speakers who voiced opposition to the ban were Pelham bar owners and patrons, and claimed a smoke-free ordinance would infringe on their rights.

Larry Smith, who owns a small business in Pelham, said the ban would negatively impact his revenues and sales taxes paid to the city.

“I don’t smoke, I never have in my life. But I choose to allow smoking (at my business),” Smith said. “My revenue base is close to 70 percent smokers. We should have the right to have a private business that allows smoking.

James Dunaway said a citywide ban would infringe on rights he fought for in the military.

“We went and put our lives on the line fighting for our country, and we can’t sit down and enjoy a beer and smoke?” Dunaway said.

Several who spoke in favor of the smoking ban said they have been personally affected by the impacts of smoking or second-hand smoke.

Gerald Castello, a longtime smoker currently battling lung cancer, encouraged the city to protect its business patrons from being exposed to cigarette smoke.

“Cities and governments make laws all the time. You have to wear a seat belt when you drive. You have to wear a helmet on a motorcycle,” Castello said. “You can’t smoke anywhere in a city of Pelham building. I think the city should protect its residents like it protects its workers.”

Teresa Stahl claimed being exposed to smoke infringes on her rights as a non-smoker.

“I wish we could ban smoking entirely, but I know that imposes and infringes on others’ rights,” Stahl said. “We are only asking that smokers not infringe on our rights.”

During an interview after the hearing, Pelham City Council President Rick Hayes said the City Council is “nowhere near” ready to vote on the matter, and said the council likely will have more opportunities for public input on the matter soon.

“We are trying to find the right way to address this issue in a way that’s best for everyone,” Hayes said.