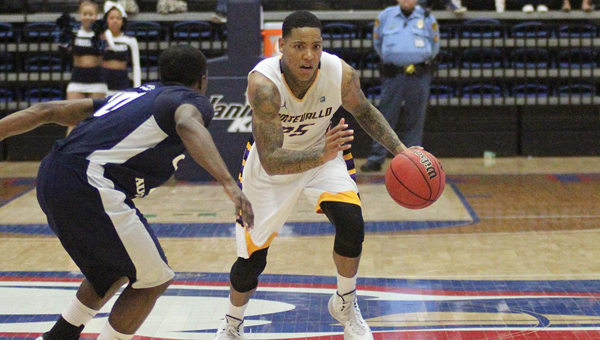 Troran Brown of Montevallo led the Falcons to a 74-66 victory over Young Harris on Feb. 25 to wrap up the regular season. (Contributed)

MONTEVALLO – Having already clinched the regular season Peach Belt Conference Championship, the University of Montevallo men’s basketball team played its final game before postseason play on Feb. 25. The Falcons took care of the Mountain Lions from Young Harris College 74-68 for their fifth-straight win.

UM closed the season winning 17 of its final 19 games, all of which were Peach Belt Conference contests.

It was also senior day for the Falcons, who honored four key members of their team: Shykeem Jackson, Larry Slaughter, Ryan May, and Troran Brown.

The excitement of the pregame ceremony honoring the seniors did not translate over to the beginning of the game, as Young Harris jumped out to a 15-8 lead just five minutes after tip-off.

However, Montevallo quickly gathered itself and strung together a 24-5 run to put the home team comfortably in front. At the half, the lead for the Falcons stood at 41-33.

In the second half, the Mountain Lions made it interesting, matching the Falcons basket for basket behind strong performances by Isiah Johnson, Kevin Altidor, and C.J. Wilson.

The visitors, who were riding a seven game winning streak coming into Wednesday night, cut the lead to just two with under four minutes to go.

Within a minute, the Falcons extended the lead back out to a more comfortable eight-point margin, highlighted by a put back dunk from Slaughter and a few strong drives to the hoop by Bryant Orange.

Young Harris would be unable to ever catch back up to the conference champions and fell 74-66.

Brown finished with a game-high 21 points.

Orange had 10 points off the bench on 5-of-7 shooting. He also grabbed six boards and had a team-best two steals in 21 minutes on the floor.

Senior starters May, Jackson, and Slaughter combined for 24 points. Slaughter also grabbed nine rebounds, which was the most on the team.

The Falcons (21-8, 17-2) cut down the nets after the impressive showing, and celebrated their outright Peach Belt Championship.

Steven Knudson of the University of Montevallo was named the Peach Belt Conference Player of the Week after hitting four... read more