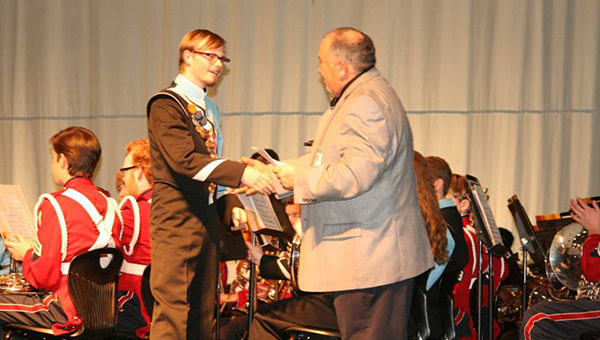 The scholarship is awarded to a senior who has been selected for honor band. They must fill out an application that lists their accomplishments as well as writing an essay for the scholarship. The student applying must also have plans to continue pursuing music after high school.

King has been a band member since sixth grade in the Pelham schools before coming to Helena after the new high school was built.

“There are seven total high schools who are eligible to participate and several of the schools’ students apply,” said Burnside. “I think it shows that Helena has a lot of students who are active in outside events in addition to what we’re doing. Students who choose to be active end up being successful.”

King plays the French horn and plans to attend Auburn University in the fall. King has plans to join the marching band and concert band at Auburn. King is currently undecided on a major, but believes he wants to do something that involves music.

“Alex is an outstanding student and musician,” said Burnside. “He has a wonderful attitude and work ethic.”

Helena Elementary School is hosting their 11th Annual Pancake Day on Saturday, Feb. 28, from 7 a.m. to noon in... read more