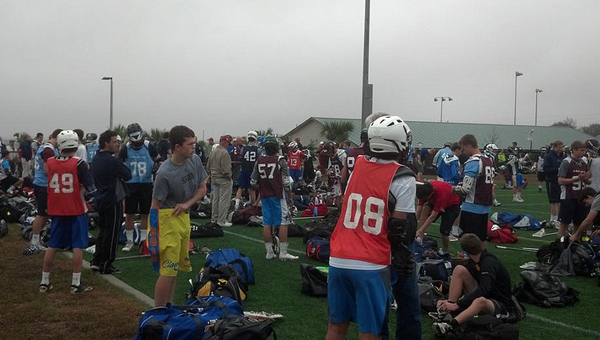 The scene at a Lacrosse Academy of Birmingham summer session. (Contributed)

Our culture is obsessed with winning. At all levels of competition we venerate the result above all else. We exude the Al Davis mantra, “Just win, baby” at every level of our society. The youth-league, YMCA co-ed basketball game on Saturday morning has turned the volunteer dad-coach into Bobby Knight reincarnate. I speak from experience here. I coached a U-7 basketball team and watched the opposing coach one Saturday morning get ejected, refuse to leave the game, and then erupt in a molten lava-flow of expletives that he spewed across the court aimed at all living things beneath the Sun.

Obviously, this guy was the crazy exception. Not everyone is like this and, in fact, most coaches are quite wonderful, level-headed people. The obsession with winning that has engulfed our society comes from a good place, a true place. Giving less than your best is an affront to the very nature of sport. Winning is important, giving a full effort is important, and the counter-culture that has sprouted up in youth sports of leagues that don’t keep score and give trophies based solely on participation is a slap in the face to the true nature of competition. The perception of appropriate levels of effort in sports, especially youth sports, teeters wildly between these two extremes, constantly trying to find the acceptable middle ground.

One organization that has mastered this unstable art, and has found the balance between competition and pacification is found right here in Shelby County. Jim Jasinski and Frank Bemis founded the Lacrosse Academy of Birmingham four years ago, and the program is moving into its fifth summer. LAB is a 501(c)(3) non-profit organization that provides free lacrosse training for youth from ages 11-17, four days a week for eight weeks in the summer. Jasinski also serves as the head coach of the lacrosse program for Oak Mountain High School, and spoke to the nature of the organization.

The program, which started out servicing 25 kids in its inaugural summer, had over 400 participants last summer. The growth in numbers LAB has experienced has been a process, and is due to both the growing nature of the sport in the area and the way in which LAB is set up. Recently the organization was one of five across the country to be awarded the National Community Award by the Bill Belichik Foundation. Jasinski credits LAB’s unique ability to draw kids from across all demographics as one of the main factors as to why Belichik gave them the award.

“He (Belichik) liked that we were not just a downtown organization,” Jasinski said. “We want to provide access to all points of the city.”

The fact that the program is free does not mean the quality of the coaching or experience is in any way diluted from any other option.

“No one in the country is doing what we’re doing,” Jasinski said. “Development of players is the main key, that’s why we’re called an academy. We don’t want kids showing up just because it is free, but because it’s better. We have the best education quality around. ”

One of the coaches that provides the education is Brad Olzinski, an upstate New York native who has been involved with lacrosse since an early age, and believes the sport is on the rise.

“It’s a sport that draws athletes,” said Olzinski. “It’s really a combination of a lot of different sports. It’s a contact sport, a physical sport. It’s really easy to pick up and excel at if you’re an athlete.”

The training that Olzinksi and other coached like him provide is an important aspect of the program. The program does not focus on winning, but rather are trying to develop players to be the best athletes they can be, which will equip them to meet their athletic goals in season play.

The program, which is moving into it’s fifth summer, continues to serve predominantly north Shelby County residents, but also sees kids from other areas of the county and from a number of Jefferson County communities. Jasinski credits Alex Dudchok and Shelby County for being so accommodating of their efforts. As far as the future of the program, Jasinski and Bemis will look to continue to build the program and provide access to lacrosse training all across the city.

For more information on LAB, go to Lablacrosse.org.

Troran Brown of Montevallo was named the Peach Belt Conference Player of the Week after averaging 25.7 points, 7.7 assists... read more