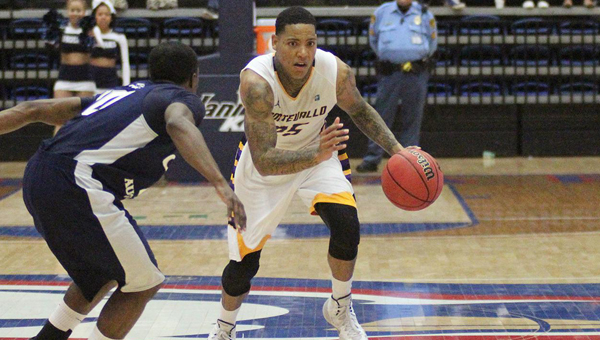 Troran Brown of Montevallo was named the Peach Belt Conference Player of the Week after averaging 25.7 points, 7.7 assists and 5 rebounds per game over the Falcons’ last three outings. (Contributed)

Brown led the charge for the Falcons as they captured the PBC regular-season championship and the top seed in the west division. The senior from Phoenix averaged 25.7 points, 7.7 assists and 5.0 rebounds per game in three contests while shooting 50 percent from the field.

The reigning PBC Player of the Year, he opened with 27 points, nine assists and five boards in a huge win over Columbus State.

He followed that up with 29 points, 10 assists and six rebounds against Flagler and finished with 21 points against Young Harris. Brown added 1.7 steals per game, hit 10 three-pointers and shot 79 percent from the foul line over the week-long span.

Brown currently leads the PBC in scoring with 19.8 points per game and is also first in assists.  He became the PBC’s all-time career leader in assists during this stretch and now has 546 in his career. His 1,638 career points are currently seventh on the Peach Belt Conference list.