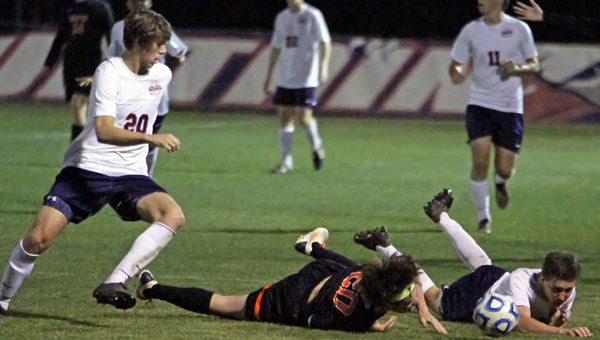 Oak Mountain, shown here last year in action against Hoover, came away with an overtime victory over Hoover on Feb. 26 by a final of 2-1. (File)

HOOVER – In an early-season matchup against two of the recently dominant programs in 7A boys soccer, Oak Mountain went to pay the Hoover Bucs a visit on Feb. 26, and escaped with a satisfying overtime victory. The Eagles of Oak Mountain have been to the 6A state finals each of the last four years, but have only brought home the hardware one time during their run, which happened in 2011, and will look to compete for the first 7A title in state history this season. One of the teams who will provide the biggest challenge to the Eagles’ postseason aspirations is Hoover, who came into the contest with a 6-0-2 record.

The Eagles struck first in this contest with a goal that came in the 14th minute of the first half to give the Eagles an early 1-0 lead over the home team. Both teams battled for possession for most of the first half, with the Eagles getting numerous chances in the attacking third via corner kicks and precise passing. Hoover challenged late in the half, but after a Bucs corner kick attempt was cleared with under a minute to play, the half ended and Oak Mountain still had their noses in front.

In the early stages of the second half, Hoover was awarded a corner kick, which was subsequently cleared by the Eagles, however in the ensuing action Hoover was awarded a free kick in Oak Mountain territory. After the Bucs ensuing shot did not find the back of the net, Connor Burger was in the right place to tuck a rebounded shot in behind the Oak Mountain keeper to even the score at 1-1.

The rest of the second half went by without either team being able to score. Both Hoover and Oak Mountain threatened on numerous occasions, but when the moment of truth came neither team could capitalize, and regulation ended with the score leveled at one goal apiece. Because area games cannot end in a tie, the game went into an overtime period that consisted of two five-minute golden goal halves. In a golden goal scenario, the first team to score automatically wins the game. If neither team scored in that ten-minute time frame, the game would be decided by penalty kicks. Trigg Langner scored in the second overtime period with under one minute left to play to give the Eagles a dramatic 2-1 victory.