Calera softball goes 3-0 on the weekend 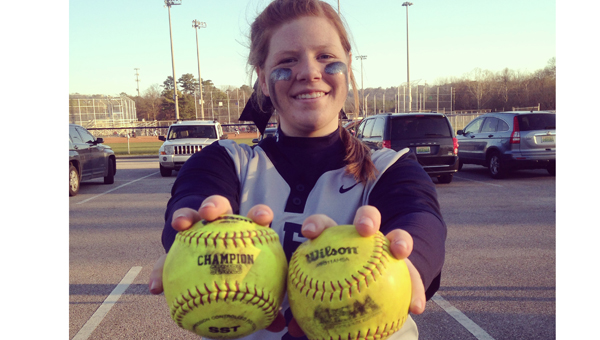 Shelby Wright of Calera displays her two home run balls she hit in a Feb. 28 contest against John Carroll. Calera went 3-0 on the weekend. (Contributed)

HOMEWOOD – In a two-day tournament at Homewood High School and Middle School stretching from Feb. 27-28, the Calera Lady Eagles won their three-game stint by a combined score of 25-1.

The first game of the tournament was against Thorsby on Feb. 27, and the Lady Eagles handled the Lady Rebels easily over the course of four innings on their way to an 8-1 victory. Emily Sanders pitched three innings and gave up one run on two hits for Calera before Ashlynn Hamm finished the game for the Eagles on the mound in the fourth inning. Kenyah Speigner went 2-2 from the plate and drove in one run to lead the Lady Eagles from the plate in the first outing of the weekend.

In the next outing, a morning game against John Caroll on Feb. 28, Calera won by the same margin of victory as they had over Thorsby, but held John Caroll scoreless on their way to a 7-0 victory. Shelby Wright going 2-2 with two home runs highlighted this contest. Her first bomb came in the first inning when she drove a pitch over the center field fence. Wright struck again in the top of the third, this time sailing one over the left field wall. Wright’s first homer brought home three runs while her second brought in two to give her five RBIs on the day.

The last contest of the weekend came against Shades Valley and saw the Lady Eagles only bat three times. A big first inning brought home six Calera base runners and was highlighted by two deep doubles to center field courtesy of Charley Clark and Emily Sanders. Two more runs in the second and third innings, respectively gave the Lady Eagles the 10-0 victory. Calera outscored their Feb. 28 opponents by a cumulative score of 17-0.

Sanders pitched three shutout innings against John Carroll before Shay Dennis and Hamm finished the tournament off on a dominant note for Calera.

The Lady Eagles will turn their attention to a March 5 contest with Shelby County, which will take place at 5 p.m.

Thompson defeated Vestavia on Feb. 28 in come-from-behind fashion by a final score of 4-3. (File) By BAKER ELLIS /... read more