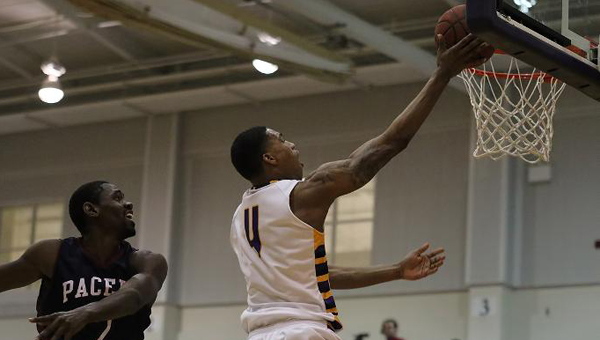 Montevallo continued its dominant run in the Peach Belt Conference with a 66-53 win over USC Aiken in the quarterfinals of the conference tournament on Feb. 28. (Contributed)

MONTEVALLO– Before their quarterfinal matchup with the USC Aiken Pacers on Feb. 28 in the Peach Belt Conference Tournament, the University of Montevallo Falcons were awarded the regular season conference championship trophy. UM’s men’s basketball team then spent the next few hours showing exactly how it earned the title, defeating USC Aiken behind a balanced attack on the perimeter and on the glass.

The game opened with the Falcons on top, as Larry Slaughter and Troran Brown scored the first eight points for UM and catapulted the home team to an 8-2 advantage during the opening moments of the contest.

Montevallo’s lead would continue to expand, highlighted by a Brown four-point play that gave the Falcons a 10-point cushion at 18-8.

After 20 minutes, the Falcons held a 36-21 lead over the fourth seed in the Peach Belt Eastern Division.

At the half, UM held the Pacers to just 21.4 percent shooting from the floor, with USC Aiken going 6-for-28 from the field.

The 15-point lead that the Falcons held at the half would fluctuate through the second frame, going down to as few as 11 and going up to as many as 20, but the Pacers would never be able to close the gap to single digits.

All told, it was a 66-53 win for the Falcons, who will advance to the Peach Belt Conference Semifinals to take on UNC Pembroke

Montevallo dominated on the glass on their way to victory. The PBC regular season champs outrebounded the visiting Pacers 41-32.

Shykeem Jackson led the Falcons in rebounds from his guard spot, grabbing 10 boards to match his 10 points.

It is the third double-double of the season for Jackson.

Brown finished with 18 points, a team-high. He also had a game-high seven assists. The reigning Peach Belt Player of the Year leads the conference in both of those categories.

The semifinal matchup between the Falcons and the Hurricanes will occur at 6 p.m. next Saturday, March 7.

Troran Brown of Montevallo was named the Peach Belt Conference Player of the Week after averaging 25.7 points, 7.7 assists... read more