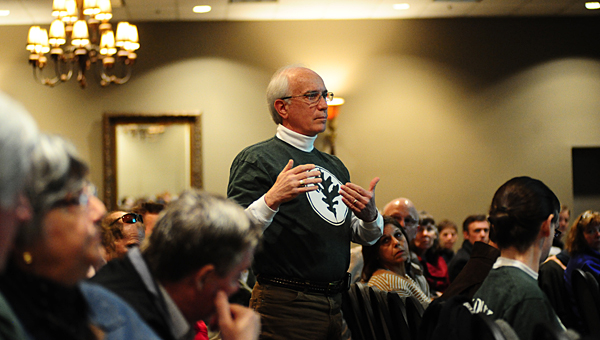 PELHAM – The vast majority of the more than 20 speakers who shared their thoughts on the future of Oak Mountain State Park during a March 2 public forum with the Alabama state parks director said they are opposed to a hotel and conference center at the park.

The majority of the more than 200 attendees at the about two-hour public hearing moderated by Alabama State Parks Director Greg Lein at the Pelham Civic Complex and Ice Arena were members of the “Keep Oak Mountain Wild” group seeking to block a proposed 175-room hotel and conference center in the park.

During the hearing, members of the group shared concerns such as increased vehicle traffic in the park, destruction of natural resources and potential future financial woes as a result of the hotel and conference center.

At the beginning of the public comment portion of the meeting, Keep Oak Mountain Wild presented Lein with a petition signed by 3,509 individuals against the proposed hotel development.

“All of those activities we enjoy and we value our park for are harmed by this,” group member Jeff Mersmann said of the proposed development, claiming the proposal is being driven by “private development interests.”

“Lodges have their place,” Mersmann added. “(Oak Mountain) is unique because it’s green, because it’s unspoiled. Let’s keep it that way.”

Group member Ron Johnson said building a hotel in the state park would “destroy what we’ve got now.”

“It’s the only place we’ve got left that’s southern woodland that’s a place people can go,” Johnson said. “This is a woodland area, and this is the way it needs to stay.”

Only one speaker clearly spoke in favor of the hotel during the public hearing.

“Where were y’all when they built the golf course? Building this lodge ain’t going to hurt that park,” said Bobby Whaley. “Anything that has been done has done nothing but benefit the park.”

Lein said the state park system has not yet decided if it will partner with Shelby County and the city of Pelham to bring the development to the park.

“We have committed to explore the concept with the local governments that initiated this. Nothing has been decided,” Lein said. “We absolutely have the last word. It’s our park. All public comments will be considered.”

“The question is not if the dam will fail, but when the dam will fail,” Jaudon said, as he and Bell-Guercio encouraged Lein to have the park’s dams analyzed by a “qualified, independent firm that is not funded by the state.”

“If they are fine, then that would be another seal of approval and I will shut up and move on,” Bell-Guercio said.

Lein said the state agency is awaiting the results of a previously funded flood inundation study.

“Our dams have been repeatedly inspected. They are fine,” Lein said. “What we need to do is finalize the inundation study, then that will shed light on the condition of the (OMSP Lake) dam.”

An exchange between a Keep Oak Mountain wild member and Lein briefly became heated when group members were encouraging Lein to hand the microphone to Bell-Guercio during the flood study discussions.

The man, who was sitting on the right side of the room, repeatedly said “Give her the microphone” as he stood up from his chair and walked toward Lein, who said “Please sit down, sir” multiple times. As Lein handed the microphone to Bell-Guercio, an armed state park ranger approached the man, who then returned to his seat.