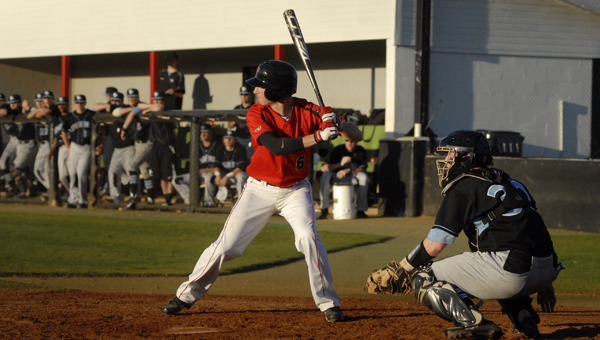 Thompson defeated Vestavia on Feb. 28 in come-from-behind fashion by a final score of 4-3. (File)

VESTAVIA – Collin Lillie pitched five solid innings for Thompson before John Curtis Goolsby came on to close the game out for the Warriors. Lillie gave up three runs on two hits and fanned six batters on his way to a 73-pitch outing. Goolsby only threw 33 pitches in two innings of work and gave up no hits. The Thompson bats were the difference in the game, however, as a late, seventh-inning surge pushed the visiting Warriors past Vestavia on Feb. 28 by a final of 4-3.

The Vestavia scoring came in one lump sum in the fourth inning. After Sam Harvey drove a leadoff triple to deep center field and Landon Crowder drew a walk with one out, JD Gann hit a bomb over the left field fence to give Vestavia a 3-1 lead. The Rebels took a 3-2 lead into the last inning of play before the Thompson bats came through in the clutch.

With two outs and Zach Brammer on third base after drawing a walk, stealing second and advancing to third on a groundout, the Warriors had their backs against the wall. Facing a 1-2 count, Chris Lewis was able to drive a double to left field that brought Brammer home and kept the game alive. Two batter later, Lance Johnson was able to drive another double to left that brought Lewis home and gave Thompson the lead at 4-3.

The game ended on a nifty double play in the bottom of the seventh and the Warriors advanced to 4-1 on the year.

Johnson and Heath Haskins both went 2-4 from the plate for Thompson to lead the Warriors in hits. Carter Jacobs pitched four innings and gave up one earned run for Vestavia before turning over the reins to Caden Clemmons and Brandom Gorman. Clemmons pitched two innings before Gorman came in in the seventh and gave up the winning runs.

Thompson was able to defeat the visiting Chelsea Lady Hornets on Feb. 27 by a final of 4-2. (Contributed) By... read more