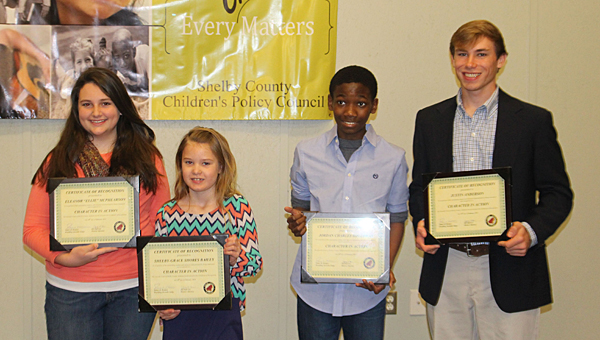 Four Pelham students were honored for serving as an example for their classmates, achieving high grades and demonstrating leadership qualities at a young age during a recent Shelby County Children’s Policy Council meeting.

In her nomination form, Bailey’s teachers praised her for always offering to help her classmates, and for demonstrating a “sweet spirit” and kindness.

“She notices things about others and has a special talent for making others feel important,” VES second-grade teacher Leslie Lazarre wrote. “I can always count on her to partner with those that have a difficult time working with others.”

“He is not haughty or arrogant in any way,” read his nomination. “He leads by example and others seem to enjoy being around him and following his lead.”

RMS Principal Susan Hyatt touted McPhearson for helping to host U.S. Congressman Spencer Bachus during a 2014 visit to the school, for being “very polite and respectful to all age groups” and for balancing academics with her extracurricular activities.

“On Ellie’s last birthday, she did the invitations herself, and instead of asking for gifts, she asked for attendees to donate that money to charity,” Hyatt wrote. “Ellie is a very special young lady.”

“Justin is well-respected by his peers and teachers,” Cochran wrote. “He is kind, polite and always friendly to all people, including his friends and others.”