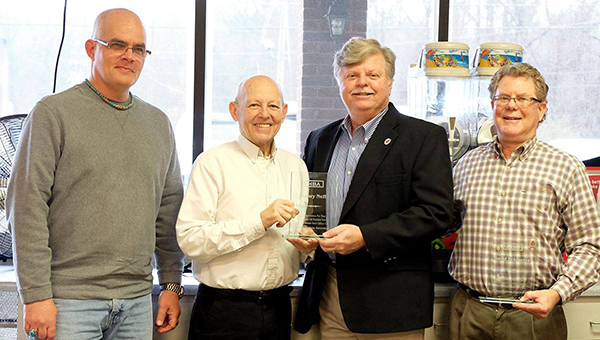 HBA members David Schlueter and Henry Neff were honored at the HBA monthly meeting on Tuesday, March 3, for their years of service on the HBA’s board of directors. (Contributed)

HELENA–The Helena Business Association hosted its monthly meeting on the morning of Tuesday, March 3, and Helena Mayor Mark Hall was on hand to give a brief update on the state of the city.

The meeting was held at Frankie’s Market Café where local business owners and members of the City Council were in attendance to enjoy breakfast and hear from various speakers.

Bob Van Loan, president of the Helena Business Association praised Mayor Hall and the City Council for their involvement with the meeting each month and showing that they care for the businesses in Helena.

“A couple of years ago it would’ve been unheard of to have any of our local leadership present at one of these meetings,” said Van Loan. “Now at virtually every meeting, city hall has representatives and it’s a great thing. One of our mission components is to further relations with the city and be a trustee advisor to the city council and to the mayor’s office.”

Some of the things Hall addressed were the positives the new high school has brought to the city, utility concerns, road updates and the overall outlook of the local economy to name a few.

“The high school has been a tremendous addition,” said Hall. “That in itself has contributed about a quarter of a million dollars boost in revenue that we were trying to figure out where it came from all of a sudden. It keeps people here; we have high school football where we have about 5,000 people on Friday nights. Those kind of things are bringing good activity to the city.”

Hall said the economy is starting to move in a positive direction from where it was a few years back.

“We have a very positive outlook for the coming year, “ said Hall. “We’re projected at about another $7 million in revenue overall. Our home builds are up already this year. That indicates that the total economy is starting to come back.”

HBA members David Schlueter and Henry Neff were also honored at the meeting for their years of service on the HBA’s board of directors.

UAB announced the launch of a study into the benefits of cannabidiol oil in the treatment of severe seizure disorders,... read more