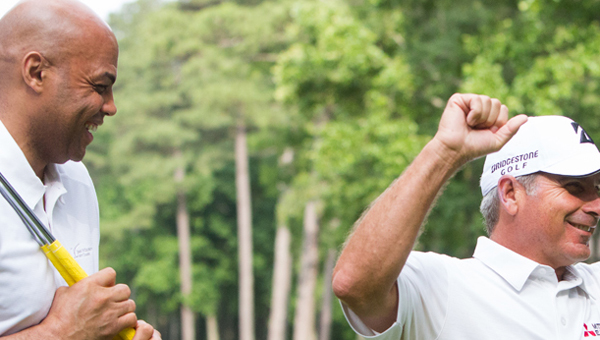 Celebrities such as Charles Barkley (left) have participated in Champions Tour pro-ams in the past with golfers like Fred Couples (right). The Regions Tradition Celebrity Pro-Am will take place on Wednesday, May 13 at Shoal Creek. (Contributed)

The pro-am, which will precede the following four days of championship play, and will consist of an “up-close-and-personal relaxed atmosphere when fans can meet the celebrities and golfers.” The group of amateurs signed up to play at this point includes Nick Saban, Gus Malzahn, Bo Jackson, Auburn basketball coach Bruce Pearl, Mississippi head football coach Hugh Freeze and Mississippi State head football coach Dan Mullen.

The Regions Tradition is an event that is a part of the Champions Tour, which boasts some of golf’s most recognizable names such as Fred Couples, Bernhard Langer and Kenny Perry. The goal of the pro-am is to partner a celebrity amateur golfer with a professional and compete against other teams in a fan-friendly environment.

This year’s championship is offering $20 good-any-one-day grounds tickets, valid each day of the tournament week or weekend, according to the press release. A weekly tournament package is available for only $65, and includes access to the pro-am event in addition to the rest of the championship week and weekend.

Shoal Creek, the host course, has been ranked in the top 50 golf courses in the country by Golfdigest.com and was designed by Jack Nicklaus. The course has played host to the PGA Championship in 1984 and in 1990.

The Pelham baseball Panthers, shown here in 2013, are once again off to a strong start, winning four games from... read more