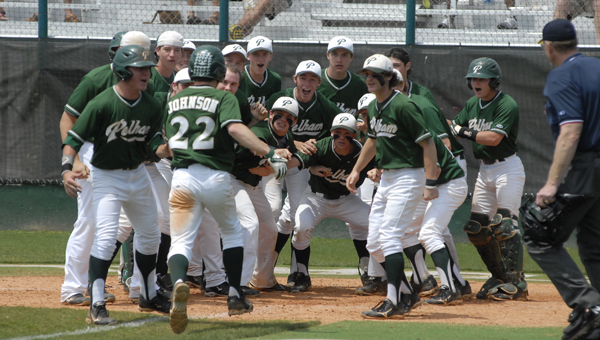 PELHAM – During a two-day stretch from Feb. 27-28, the Pelham baseball Panthers moved their record to 7-0 on the year after four wins in the two-day stint. The first day saw the Panthers take on Pinson Valley in a doubleheader where they won both games by a combined score of 21-1 and had little resistance from a game Indians squad.

The Panthers needed to take their game to the next level on the following day against an Oak Mountain squad that presented a tougher challenge. Pelham was able to nudge two runs across the plate in the second inning after Reid Gardner smacked a leadoff single into left field and was subsequently brought home when Paul Christian Benton grounded out to second. Paul Brashier, who reached base directly after Gardner had singled, was brought home later in the inning when Boomer Murchison reached base when he roped a single into center.

Those runs would prove to be enough for the Panthers due to the outstanding pitching of Alabama commit Sam Finnerty, who pitched a complete game no-hitter. His 78-pitch, seven-strikeout effort was his first of the year and was a positive early season sign for the Panthers squad.

“Sam did a great job commanding the strike zone with his pitches,” Sean Anderson, head coach of the Panthers, said. “We’ve got to play better defense, but we found a way to win and that’s what is important right now.”

The Panthers defeated Oak Mountain 3-0 before turning their attention to Hewitt Trussville in the afternoon. The Huskies were able to score the most runs on the Panthers of any of the three previous teams, but still only managed to scrape up two runs during the contest due to a complete game, two-hit showing from Pelham pitcher Connor Radcliff.

“Connor didn’t have his best stuff but he continued to battle and gave us a chance to win,” Anderson said. “Anytime you can get a win against a quality program like Hewitt Trussville, it’s a good win.”

Pelham will turn their attention to a March 3 doubleheader with Pelham, which will start at 4:30.

Montevallo continued its dominant run in the Peach Belt Conference with a 66-53 win over USC Aiken in the quarterfinals... read more