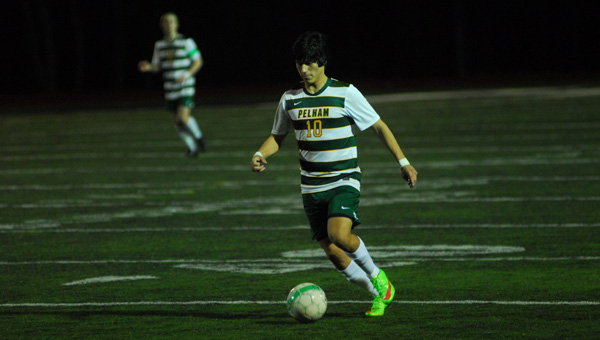 PELHAM – In a March 3 rivalry game, which didn’t exist just 12 months ago, the Helena Huskies made the short trek to Pelham to play in the first-ever contest between the two schools. Helena, which formed at the beginning of the 2014 school year, has athletes in all sports that were in the Pelham school district last year, and the vast majority of the Helena soccer roster is made up of ex-Panthers.

Helena fought gamely in the inaugural matchup between the two squads, but superior possession and speed led the Panthers to a 6-0 win on the night.

The first and only goal of the first half was scored in the 33rd minute by sophomore forward Edwuin Patricio Sostenes after he strung together a number of nifty moves to get into Pelham’s attacking third. Patricio Sostenes seemed to have the ball glued to his foot, as the magician seemed to be impossible to knock off the ball for much of the evening. After his footwork got Pelham in position to score, he was able to put a ball past the outstretched arms of Helena keeper Phildon Dublin. The Panthers took the 1-0 lead into the break.

The goals came easier for Pelham in the second half, with sophomore midfielder Yunior Tejada-Serrano connecting on a strike from outside the penalty box that found the corner netting. After Tejada-Serrano’s goal, the floodgate doors seemed to open on Helena, and the Panthers would add four more goals in the half.

Jose Jimenez Lopez found the back of the net in the 73rd minute, followed quickly by a goal from Jason Nichols just three minutes later. Not long after, Jesus Armando Valencia-Martell tucked one into the back of the net on an impressive shot from a seemingly impossible angle off to the left of goal. The scoring was finished when 8th grade substitute Irvin Rodriguez Benitez knocked one past backup keeper for an 88th minute goal to send Pelham home with the 6-0 win.

Helena moved to 5-2 after going 1-1 on Feb. 28 against Athens and Hale County, respectively. (Contributed) By BAKER ELLIS... read more