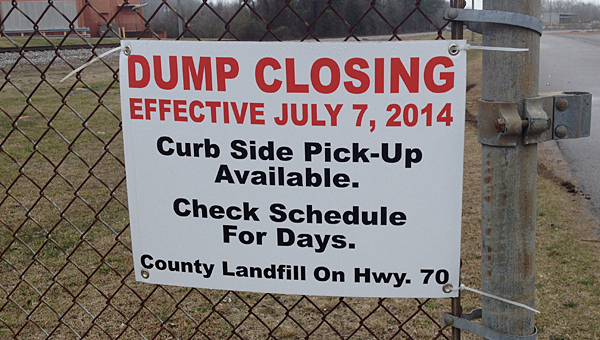 A sign greets residents at what was once the entrance to the Alabaster city dump on Maintenance Drive. (Reporter Photo/Neal Wagner)

ALABASTER – The city of Alabaster’s dump near Buck Creek Park remains closed to the public, and the city has changed its method of collecting large trash items over the past several months.

The city closed its public dump, which was between Buck Creek Park and the Alabaster City Hall building, about seven months ago after the city “became aware of certain liabilities” associated with the public dump, City Manager George Henry wrote in an email.

Alabaster leaders closed the dump due to property and environmental concerns, Henry said. A sign on the entrance to the dump on Maintenance Road reads “Dump Closing, effective July 7, 2014,” and encourages residents to contact the city for curb-side pickup service.

Although city residents are no longer able to bring items to the city dump directly, the Alabaster Public Works Department is offering to collect items from residents’ homes and transport them to the Shelby County Landfill in Columbiana.

“We take these items to the Shelby county landfill who requires us to, among other things, keep items separated,” Henry wrote.

Henry said residents looking to have a large item picked up by Public Works and transported to the county landfill should use the “Report a concern” link on Cityofalabaster.com.

“If someone has a problem or concern, filling out the online form will initiate a process by which we can help the resident,” Henry wrote. “Ultimately our desire is to continue offering the service, it’s just the method has been changed to become compliant with ADEM, EPA and other regulations.”