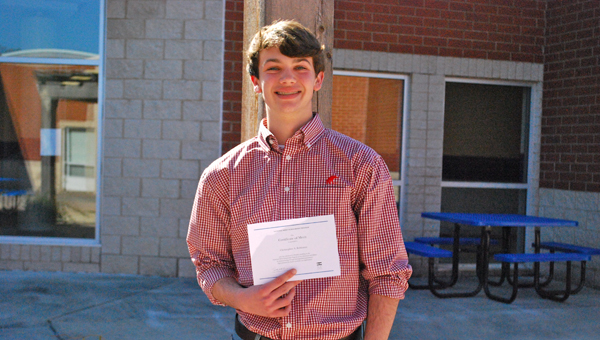 CHHS senior Christopher Robinson was named a National Merit Scholarship finalist. He plans to attend the University of Alabama and major in electrical engineering and computer science and minor in Spanish. (Reporter Photo / Molly Davidson)

“I’ve known Christopher since middle school,” Trucks said, noting he coached Robinson on the cross country team. “He’s always had a terrific attitude, a great work ethic and understood what you could accomplish through hard work.”

Robinson is no stranger to hard work, and he enjoys a challenge, listing math and Spanish as his favorite academic subjects.

“I started taking Spanish sophomore year, and I’ve loved it ever since. My goal is to be fluent,” Robinson said, adding calculus was his favorite math class. “Our calculus teacher here makes it a challenge… Learning something that’s easy isn’t worth learning.”

In addition to a full course-load of Advanced Placement classes, Robinson finds time to go to church and play the guitar—an instrument he taught himself.

Robinson was one of 16,000 students nationwide named National Merit Scholarship semi-finalists due to his high PSAT score, ranking in the top 5 percent. He found out about his selection to the finalist list through a letter.

“My favorite part of the letter were the first two words,” Robinson said with a laugh, “It read, ‘Dear Finalist.’”

The first National Merit Scholarship finalist from CHHS in nearly 10 years, Robinson credits his teachers and supportive community with his success.

“Its a very prestigious award… It’s nice to receive academic recognition, especially at the national level,” Trucks said. “(Robinson) has always been naturally gifted. What he’s willing to do on top of that got him this recognition.”

Robinson will attend the University of Alabama on a full, five-year academic scholarship.

“(Being a National Merit Scholarship finalist) takes you from four years of tuition to five years, it’s huge,” Robinson said. “(It gives me) a lot more potential to do a lot more things in college.”

Robinson will pursue his love of math and Spanish in college, majoring in electrical engineering and computer science and minoring in Spanish. He also plans to use a $2,000 academic stipend to study abroad in a Spanish speaking country.

Although he is excited to attend Alabama, Robinson said he will miss Chelsea High School.

“I’ll miss my classmates the most,” Robinson said. “It’s the people I’ve grown up around… It’s such a nice and friendly group of people. Its hard to leave the community where you grew up.”