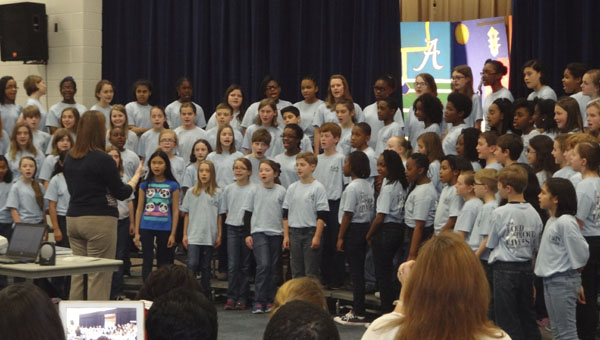 Hopkins, a fifth grader, was among nearly a dozen students who performed roles of famous black Americans in the school’s Black History Month program at 2 p.m.

“I think it was truly important because we represented most black people around the world,” Hopkins said after the program, which was rescheduled from Feb. 26 because of inclement weather.

Third grader Zorah Bell played the part of Rosa Parks, a Civil Rights activist who would not give up her seat to a white passenger on a bus.

Bell said she enjoyed bringing excitement to the audience.

“When you came on stage, people knew you,” Bell said.

CIS teacher Lindsey Irvin oversaw the program and said students in third through fifth grades created and performed each part of the program, including the oral biographies, a multimedia presentation, a song and a step dance.

“Everything is student-directed,” Irvin said. “They even made the sets. They had a good time.”

The fifth grade choir sang a song called “Get on Board.”

“My favorite part about it was when we did our step dance because I think all of us worked really hard to be in there,” third grader Molly Lawley said.

Fifth grader Chauncey Collins performed in the step dance and introduced the choir.

Third grader Layla Miller’s parents were present to see her perform the part of Sarah Breedlove, also known as Madam C.J. Walker, who was one of the first American women to become a self-made millionaire with her specialized hair products.

“It was my second time being on stage,” Miller said, noting she was nervous before she spoke.

CHHS senior Christopher Robinson was named a National Merit Scholarship finalist. He plans to attend the University of Alabama and... read more