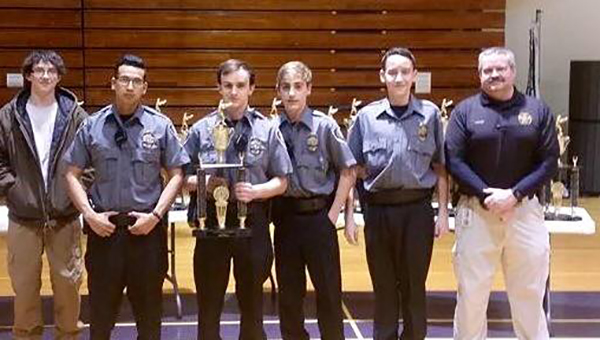 The Helena Police Explorers received first place in two events and third place in another at the State of Alabama Law Enforcement Explorer Competition on Feb. 21. (Contributed)

MONTEVALLO–The Helena Police Explorers had an outstanding showing at the State of Alabama Law Enforcement Explorer Competition on Feb. 21, where they placed in three separate events.

The annual state competition was held at the University of Montevallo where other explorer agency teams from Alabama, Florida, Georgia and Louisiana competed.

The teams consist of teenagers and young adult’s ages 14-20 that are interested in pursuing a career in law enforcement. They will compete in mock scenarios such as a traffic accident investigation, crime scene investigation and arrest and search.

The explorers work the scenes or scenarios the same way real law enforcement would and they are graded on how well they handle each scenario.

Some of the things the judges looked for were did they speak to the drivers and passengers from the accident, did they obtain everything needed to make a correct report and did they approach a vehicle correctly for a traffic stop.

All of the scenarios are the same for each team and the competition is based on the same standardized grading.

Helena Patrol Officer and Explorer Advisor Joshua Lindsey believes the program is great in preparing kids for a career in law enforcement and life in general.

“I think that it prepares them not only for law enforcement careers but for life in general,” said Lindsey. “It teaches them teamwork and problem solving skills they can use and the lessons learned from this goes way beyond just the law enforcement field.”

The explorers also attend the National Law Enforcement Competition held ever other year.