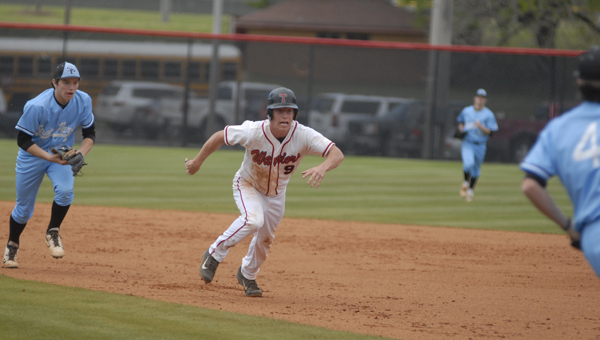 The Thompson baseball Warriors fell to Hartselle on March 3 by a final of 8-7. (File)

ALABSTER – In a back-and-forth affair between Thompson and the Harstelle Tigers on March 3, the Warriors had a successful day from the plate but could not convert the hitting prowess into enough runs to skate by Hartselle, and fell 8-7.

Thompson used three separate pitchers on the day in the losing effort. Tyler Hosmer started on the mound and lasted two innings, giving up three runs on six hits before Tanner Terry took over the pitching duties. Terry went three innings and gave up five runs, four of them earned, on six hits through his three innings of work. Hunter Goggans pitched in a relief effort, finishing the last two innings without surrendering a hit.

Hartselle was able to jump on the Warriors early, building a 7-0 lead at the end of the third inning behind a three-run second and a four-run effort in the third inning. Thompson outscored Hartselle 7-1 the rest of the way, but the hole was slightly too big for the Warriors to climb out of.

The highest scoring concentration for Thompson came in the bottom of the fourth inning when the Warriors hung four runs on Hartselle. Lance Johnson, Chris Lewis, Zach Brammer and Stephan Poplin all singled in the inning to help drive base runners in and cut the lead to only three runs.

In the bottom of the fifth, Lewis smacked a deep triple to center field that drove in a run and gave Thompson some momentum, but the inning was ended when Riley Reach was later picked off at first base to cut the comeback attempt short.

Thompson scored another run in the sixth to make it an 8-7 ballgame, but were unable to drive any more runs home in the last inning, and the Warriors fell to 4-2 on the season.

Lewis led the way for Thompson from the plate, going 3-4 on the day with a triple and a RBI. Reach, Poplin, Johnson and Collin Lillie all went 2-4 on the day.

The Warriors will turn their attention to Mississippi, where they will be traveling to play their next three games, the first of which will be March 5.

Thompson defeated Vestavia on Feb. 28 in come-from-behind fashion by a final score of 4-3. (File) By BAKER ELLIS /... read more