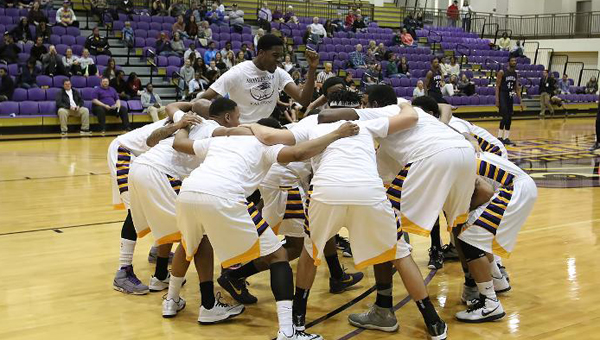 Montevallo was ranked fourth in the Southeast Region by the NCAA recently. The Falcons are currently playing in the PBC conference tournament. (Contributed)

INDIANAPOLIS, Ind. – The third installment of the NCAA regional rankings of the 2014-15 basketball season has been released, and the University of Montevallo men’s basketball team is ranked fourth in the poll.

The Falcons have been fourth in the poll all three weeks.

Montevallo has won 18 of its last 20 games. In that time, the Falcons have won the Peach Belt Conference Regular Season Championship and advanced to the semifinals of the PBC Tournament.

Of the 10 teams ranked in the region, six of them come from the Peach Belt Conference.

UM’s opponent in the semifinals of the Peach Belt Conference Tournament, UNC Pembroke, is ranked second in the region and 15th in the country.

Reigning Peach Belt Player of the Year Troran Brown has led this year’s Falcons team. Brown leads the league in points per game (19.7) and assists per game (6.5).

Larry Slaughter is second on the team in scoring, averaging 12.4 points per game. He also averages 9.5 rebounds in each contest, which leads the team and is second best in the Peach Belt Conference. He is shooting the highest percentage from the floor (61.1%) in the conference and has started each game this year.

Shykeem Jackson is just behind Slaughter, averaging 12.3 points per game. He averages 5.6 rebounds per game from his guard spot and leads the Falcons in steals on the season. Jackson is a constant for the Falcons, starting every game and leading the Peach Belt in minutes played.

Four-year starter Ryan May is averaging 10.6 points per game. May shoots 45.2% from beyond the arc, which is the third-best percentage in the conference.

All four of the aforementioned players are playing their senior seasons at Montevallo.

UM will face UNC Pembroke in the semifinals of the Peach Belt Conference Tournament on Saturday, March 7. The game will tip off at approximately 5 p.m.

Montevallo continued its dominant run in the Peach Belt Conference with a 66-53 win over USC Aiken in the quarterfinals... read more