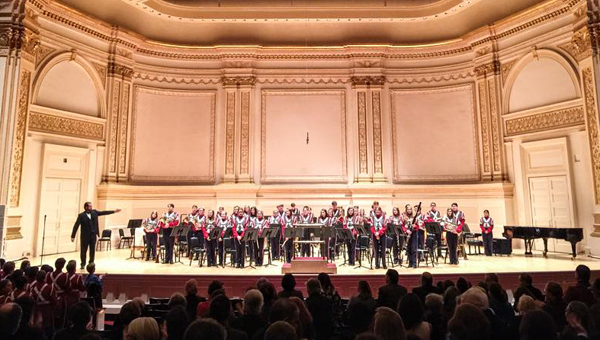 The Oak Mountain High School Band took center stage at Carnegie Hall this past weekend in the Spring Instrumental Music Festival on March 1.

The OMHS concert band and wind ensemble, along with a band from Quebec and one from Pennsylvania, performed in the Isaac Stern Auditorium on the Ronald O. Perelman Stage at New York City’s famed concert venue.

“Anyone would agree that’s one of the premier performing venues in the country,” OMHS Associate Director of Bands Travis Bender said.

Prior to the main event, the OMHS Band was only allowed on the main stage for a 20-minute sound check “to test the waters and make any final adjustments,” Bender explained.

“It went great, both of our ensembles had their best run,” Bender said of the performances. “We were very pleased, the audience was very receptive.”

The band was selected to play in the festival through an intensive application process, which involved submitting recordings of the band’s pieces.

“The folks at Carnegie listen (and) a small number of groups get selected to perform there,” Bender said.

In addition to the performance, the nearly 250 OMHS band members had the chance to explore New York City. The students attended a performance of “Wicked” on Broadway and saw the New York Philharmonic in concert. They also visited iconic New York sites, such as the Statue of Liberty, Ellis Island, the Empire State Building and the Sept. 11 Memorial.

Even with New York’s below-freezing temperatures and snow, Bender said the trip was “a wonderful time,” and something the students wouldn’t forget.

“The whole experience was just awesome for them,” Bender said. “It gave them a taste of what it is like to be a professional performer as well… Not many people have the opportunity to perform on (the Carnegie Hall) stage.”

The Shelby County School System will be closed on Thursday, March 5, due to the threat of severe winter weather.... read more