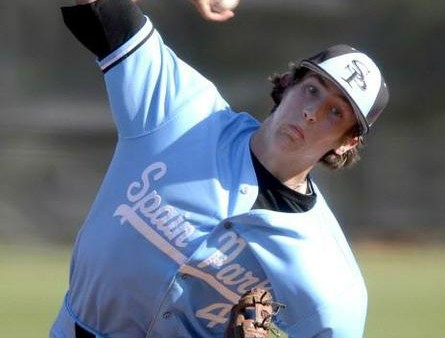 Spain Park was able to hold on in an abridged, five-inning game against Hoover to get a 6-4 win. (Contributed)

HOOVER – Quinton Hoffman pitched four innings for the Spain Park baseball Jaguars in a March 4 matchup with crosstown rival Hoover, giving up three runs on five hits as Spain Park was able to beat the visiting Bucs on a game that was cut short in the fifth inning due to weather. Hoffman went the first four innings before Adam Schultz and Julian Samaha combined to close out the fifth and final inning for Spain Park in the winning effort.

The Jaguars were able to race out to an early lead as they scored three runs in the first two innings to give themselves a comfortable lead early in the contest. Leading off in the first inning, Bryan Sanderson singled off the second pitch he saw, and came across the plate when Rodney Anderson hit a hard ground ball single to left field. Drew Hawker and Mason Duke would also single in the inning, Duke on a well-placed bunt, to help score the first three runs of the game in the opening inning.

More of the same followed for Spain Park in the second inning, as first three batters who came to the plate, Collin Walker, Jacob Rich and Sanderson, all singled to load the bases. Anderson singled later in the inning to bring Walker home and Hawker later singled to bring both Rich and Sanderson home to give the Jaguars a 6-1 lead after two innings.

Hoover would add three runs in the top of the fifth, but in the bottom of the fifth inning the game was called due to weather and Spain Park was declared the winner.

Anderson led the way for the Spain Park bats, which were especially active early in the contest, with a perfect 3-3 day from the plate and two RBIs. Sanderson and Hawker both had two hits on the day, Hawker also finished with two RBIs.

Spain Park advanced to 3-4 on the year and will turn their attention to Helena, who they will play on Saturday, March 7 at Chelsea High School at 1:30 p.m.