DeMasters, Oak Mountain looking to build on past success 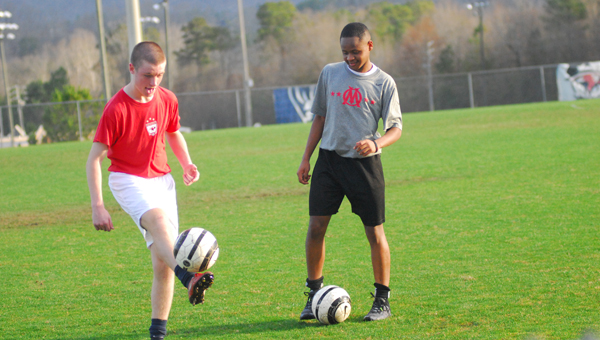 Chad Jeter (left) and Kennedy Davis kick around after practice. Jeter and Davis are members of Daniel DeMasters’ Oak Mountain soccer squad that is looking for a great 2015 campaign. (Reporter Photo / Baker Ellis)

OAK MOUNTAIN – Oak Mountain is a school steeped in soccer tradition. They have a website dedicated to both the boys and girls programs which highlight the achievements of both clubs over the course of their respective existences. The boys team last won the state title in 2011, but have reached the state championship game every year since 2011 and have not been able to capitalize since that championship. Daniel DeMasters, the second-year head coach of the program from Pennsylvania, is in the process of creating his own culture at Oak Mountain where he hopes to be able to break through the barrier the Eagles have run up against the last three years, but also wants his teams to appreciate what they’ve been able to do.

“The kids last year, I don’t think they really appreciate what they did,” DeMasters said. “It’s such an accomplishment to make it to a state championship game four years in a row. But for us to break through we have to have our players show up at the right moments to get a result.”

DeMasters, who played college soccer at Villanova University outside of Philadelphia, spent his early years playing high-level competitive soccer in the Northeast, and believes his Oak Mountain team is talented enough to play with any team from that soccer-rich region of the country.

“Talent-wise there’s not much difference (between Oak Mountain and Northeast schools),” DeMasters said.

DeMasters is set on creating a culture at Oak Mountain that is elite in every way.

“One of my goals is I want to create just the best high school experience in Alabama,” DeMasters said. He believes the fan base and community support is second to none and is extremely helpful in creating the environment he wants for his team.

Community involvement and discipline are two of the cornerstones DeMasters is looking to build his program on. “The discipline aspect, we do the littlest things, like kids tucking in their shirts,” DeMasters said. “We know that kids are going to untuck their shirts and swear at refs, and that’s the kind of stuff I’m trying to clean up. But at the same time the tradition that’s been here of winning we want to continue, just in a different way.”

As far as this season is concerned, the goal remains the same. “We believe (we can win a state championship),” DeMasters said. “We’ve got to peak at the right time and keep everyone healthy, but we believe. It’s the goal.”

The Alabama Frozen Tide will host the National Championship Tournament for the American Collegiate Hockey Association at the Pelham Ice... read more