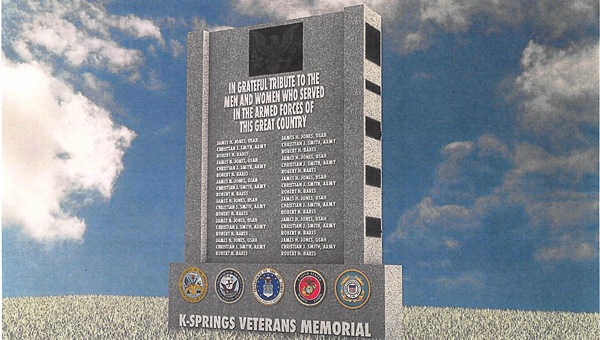 A group of veterans from the Connection in Chelsea are working to create a memorial to honor local veterans. (Contributed)

CHELSEA—A group of veterans and members of the Connection in Chelsea is working to create a memorial to recognize the veterans buried in the church’s cemetery.

The proposed plan for the memorial includes a six-foot tall granite monument atop a two-foot base. Names of the veterans buried in the cemetery and other local veterans, along with their branch of service, will be emblazoned on the monument. The monument will contain blank space for future veterans.

“It will include all veterans who have passed on, as well as those honorably discharged and still serving,” a letter from the group, called the K-Springs Veteran’s Memorial, read. “All these men and women served their country bravely and kept us safe from harm and free from tyranny.”

The words “K-Springs Veterans Memorial” will be engraved on the base, along with the five service seals.

The plan also includes the flags of each branch of service surrounding the monument, a pathway and benches.

“It’s something that’s never been done,” veteran and Connection member Jerry Shirley said. “The people out there in the cemetery have been forgotten.”

The idea for the memorial was sparked several months ago, when memorial organizer Ray Shirley noticed several veterans were buried in the cemetery.

“I was doing some repair work in the cemetery, and I got to thinking this was something we should do,” Ray Shirley said. “It started from there.”

The group worked together to count and collect information on the more than 30 veterans buried in the cemetery. Now, the group is working to raise the $30,000 necessary to complete the project.

“We’re all veterans, and we have an interest in making this happen in recognition of our veterans,” Ray Shirley said.

The group is accepting donations for the memorial’s fund, the K-Springs Veteran’s Memorial, Inc.

”All veterans who served their (country) have the right to be recognized for their service,” Ray Shirley said. “They made it possible for us to be free.”