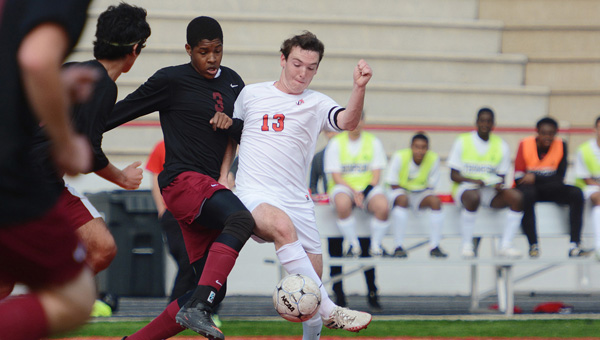 Thompson’s Brady Johnson challenges for a loose ball in their Feb. 28 contest with Gadsden City that resulted in a 1-0 win for the Warriors. (Contributed / Troya Yoder)

ALABASTER – The Thompson Warriors soccer program has gone 1-1 in their last two games, one of which was a Feb. 28 showdown with nonconference opponent Gadsden City, and the other was a March 3 contest with Auburn. The Warriors were able to continue their early season winning ways with a close 1-0 victory against Gadsden City before faulting against Auburn, where they fell by a score of 2-0.

Phillip Vaccarella found Diego Gutierrez in the 30th minute of the first half for the only goal of the contest against Gadsden City to get the win in the nonconference game. The Warriors were able to keep their net clean and preserve the shut out in the second half, escaping with a 1-0 victory.

Following their close victory over Gadsden City, Thompson slipped up against the Tigers. The offense was never truly able to get a footing or gain any ground in the March 3 matchup, and the Warriors lost 2-0.

Thompson will look to rebound from their recent loss in a March 7 contest with Sparkman. The contest will take place at 12:30 p.m. and will be held at Thompson High School.

Alex Coleman, flanked by his mother, Michele, and father, David, signs a track scholarship with the University of Montevallo on... read more