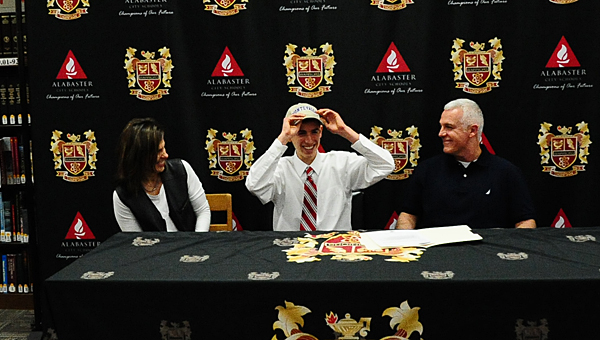 Alex Coleman, flanked by his mother, Michele, and father, David, signs a track scholarship with the University of Montevallo on March 6. (Reporter Photo/Neal Wagner)

ALABASTER – A year ago, Thompson High School senior Alex Coleman’s dream of continuing his track career at the next level seemed to be fading quickly.

Battling injuries, Coleman was unable to compete on the track, but his perseverance and determination paid off in a big way on the afternoon of March 6.

Surrounded by family, friends, school faculty members and classmates, Coleman inked a track scholarship with the University of Montevallo.

“First, I want to thank God for getting me to this point,” Coleman said during a signing ceremony in the school’s library. “A year ago, I didn’t think this was going to happen.”

Despite being sidelined by injuries last year, Coleman didn’t waiver in his dedication to the Thompson track program. Today, he has made a full recovery and has returned to doing what he loves.

“He embodies the spirit of being a Warrior. He is what we hope to be when we talk of overcoming adversity,” THS track coach Michael Montgomery said. “When he couldn’t run, he helped us coach. He ran the program, actually. He is a great supporter of his peers.”

He has completed three half marathons and placed first in the 2013 SEC Beachfest 5K and the 2014 Boulevard Blast 5K.

In addition to his athletic achievements, Coleman, a THS valedictorian candidate, also was one of 10 recipients of this year’s Montevallo Ambassador Program Scholarship valued at more than $100,000.

“That is certainly a credit to you, your family, this high school and its faculty,” said Alabaster School Superintendent Dr. Wayne Vickers. “You’re going to represent us well at Montevallo.”

Coleman said he chose Montevallo because one of his former teammates is already running for the Falcons, and because he connected with the school’s track coaches.

“I really love the coaches and the team, and I didn’t really want to be far from home,” he said.

For his parents, David and Michele, March 6 marked a major milestone.

“He really connected with the cross-country coach down there,” Michele Coleman said. “We are so proud of him.”

The Thompson baseball Warriors fell to Hartselle on March 3 by a final of 8-7. (File) By BAKER ELLIS /... read more